Does that headline seem like a bit o’ hyperbole? Well, as Rep. Moran points out in the following press release, they’re talking about taking away the $150 million annual federal funding to the Metro system. If they do that, we can all watch as Metro collapses. Then, we can all see how well northern Virginia functions. The answer: it won’t be well at all; in fact, it would be a complete disaster. Which raises a few simple questions: 1) what’s wrong with these Republicans; 2) how can they be so wildly irresponsible; 3) when can we get these lunatics the heck OUT OF OFFICE?!?

“The funding cut to WMATA will be detrimental to the system, and in turn, diminish the ability of thousands of employees to get to work,” said Moran. “Critically, these cuts will limit WMATA’s ability to fully implement the recommendations of the National Transportation Safety Board. Rider safety should not be compromised in order to score political points. ”

“This cut does not represent fiscal leadership; it demonstrates a willingness to pass the buck off to states, localities, and potentially Metro riders,” Moran continued. “The severe reductions to WMATA are just the beginning. Republicans slashed critical funding to high speed rail, Amtrak, and other necessary means of transportation all across the country.”

The annual federal funding, matched by Virginia, DC, and Maryland, goes toward capital and preventive maintenance expenditures. In exchange for funding, the federal government receives representation on WMATA’s Board of Directors. Federal government employees comprise 40% of peak Metro ridership, including Pentagon employees and others holding positions key to national security. 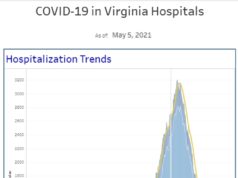 The correct decision re: Trump by the Facebook Oversight Board; now do it for others who spew lies about COVID, who undermine our democracy, etc. https://bluevirginia.us/2021/05/wednesday-news-americas-new-climate-normal-sweltering-republicans-are-purging-liz-cheney-for-opposing-trumps-insurrection-facebooks-problem-goes-well-beyond-trump#comment-5371338738

Glenn Davis' defamation suit says being called a "Gay Democrat" is false ("Glenn Davis is not homosexual and there is no evidence to the contrary") & has "caused harm to the reputation of the Plaintiff to potential voters" https://bluevirginia.us/2021/05/wednesday-news-americas-new-climate-normal-sweltering-republicans-are-purging-liz-cheney-for-opposing-trumps-insurrection-facebooks-problem-goes-well-beyond-trump#comment-5371284963 h/t @CourthouseNews @BradKutner