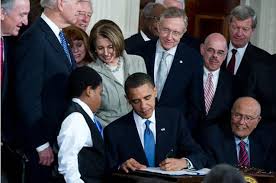 The following press release from the White House lays out the numerous benefits to Virginia from the Affordable Care Act. As much as the Republicans try to distort this law, sabotage, lie about it, etc., and as much as it would have been far better with a robust public option and other progressive provisions, it’s still a big improvement over what we had before, let alone any ideas (if any, other than “tort reform”) the Republicans might have.

As the Obama Administration marks the one-year anniversary of the enactment of the Affordable Care Act, the White House today issued a report highlighting the benefits of health reform for Virginia residents. Signed into law by President Obama on March 23, 2010, the Affordable Care Act has given Virginia residents more freedom and control over their health care choices.

The Affordable Care Act is:

More than 84,285 Virginia residents who hit the Medicare prescription drug coverage gap known as the “donut hole” received $250 tax-free rebates, and will receive a 50% discount on brand-name prescription drugs when they hit the donut hole this year.  By 2020, the law will close the donut hole completely. And nearly all 44 million beneficiaries who have Medicare, including 1 million in Virginia, can now receive free preventive services – like mammograms and colonoscopies – as well as a free annual wellness visit from their doctor

Insurance companies are now required to allow parents to keep their children up to age 26 without job-based coverage on their insurance plans. An estimated 31,200 young adults in Virginia could gain insurance coverage as a result of the law.  Additionally, most insurance companies are now banned from denying coverage to children because of a pre-existing condition.  An estimated 438,000 kids with a pre-existing condition in Virginia will be protected because of this provision.

The law provides $40 billion of tax credits to up to 4 million small businesses, including up to 108,736 in Virginia to help offset the costs of purchasing coverage for their employees and make premiums more affordable.

Improving the quality of coverage.

All Americans with insurance are now free from worrying about losing their insurance due to a mistake on an application, or having it capped unexpectedly if someone is in an accident or becomes sick. The law bans insurance companies from imposing lifetime dollar limits on health benefits – freeing cancer patients and individuals suffering from other chronic diseases from having to worry about going without treatment because of their lifetime limits.  The law also restricts the use of annual limits and bans them completely in 2014.  This will protect 4.8 million million Virginia residents with private insurance coverage from these limits.

Providing flexibility and resources to States.

The Affordable Care Act also gives States the flexibility and resources they need to implement the law in the way that works for them. Under the law, States have received millions of dollars in Federal support for their work to hold down insurance premiums, build competitive insurance marketplaces, provide insurance to early retirees, and strengthen their public health and prevention efforts.  So far, Virginia has received $59.6 million from the Affordable Care Act. Grants to Virginia include:

·         $1 million to crack down on unreasonable insurance premium increases