After ramming through his legislation denying most collective bargaining rights to public workers by using questionable maneuvers, and after approving actions in the Wisconsin Senate denying voting rights to recalcitrant (but returned) Democratic Senators, Governor Walker of Wisconsin and his Republican cronies deserted Wisconsin for a fund raiser in the District of Columbia, i.e., Washington, D.C. It appeared to be the action of a paid puppet running to his masters for a pat on the head, and bonus: “Good dog, job well done! Here’s a treat for a good dog.” 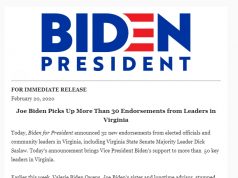 Great question by Del. Jay Jones. Answer: because the media loves nothing better than pushing a (phony) "Democrats divided" narrative, also has completely different standards for Rs and Ds. https://bluevirginia.us/2020/02/video-del-cia-price-ds-redistricting-reform-legislation-discussed-passed-by-temporarily-in-senate-privileges-elections-committee#comment-4803315003