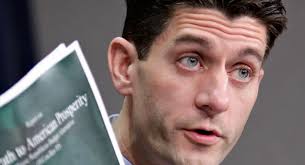 You know how John Boehner and other Republican “leaders” like to claim they’re just doing what the “American people” want them to do? Of course, that’s always been a bunch of b.s., and it continues to be a bunch of b.s. In fact, Republicans do exactly what the Koch brothers, Exxon Mobil, and the other wealthy donors/lobbyists/etc. who pull their puppet strings. More evidence? The latest polling demonstrates that the American people overwhelmingly do NOT – repeat, NOT! – approve of Republicans’ plans to destroy Medicare and slash taxes for rich people.

…it’s not just sweepingly ideological reforms that are unpopular. Cutting Medicare polls poorly even if you leave out the details. Almost 80 percent of Americans oppose Medicare cuts in the abstract, while 70 percent oppose Medicaid cuts. Slightly over half of the country wants the Defense Department left alone. The only deficit-reduction option that is popular? Raising taxes on the rich. That gets the go-ahead from 72 percent of us — though, as any budget wonk will tell you, it can’t solve anything beyond a small fraction of our fiscal problem.

In general, the poll shows overwhelming opposition to the main Republican approaches for reducing the deficit — even when they’re posed vaguely. Almost 60 percent of Americans, for instance, want a mix of tax increases and spending cuts in the final deal, while only 36 percent think spending cuts should be deployed on their lonesome…

Of course, the fundamental problem is that in order to solve the long-term, structural budget deficit we face, we can’t just do it by raising taxes on wealthy people (the only item in the polling that’s even remotely popular). We’re also, frankly, going to have to ditch the Bush tax cuts for everyone – or close to everyone – in order to cut the deficits by $4 trillion over the next decade. We’re also going to have to rein in health care spending big time, since that’s the main driver of government deficits, in addition to the recession and the fact that taxes as a percent of the economy are at decades-long lows. The question is, will either party – or the Mark Warner/Saxby Chambliss et al. “Gang of Six” – be able to come up with a “grand bargain” that has a chance of passing, even if it “pisses everybody off” (to paraphrase Mark Warner)? Personally, I’m not holding my breath. In the meantime, though, we’re going to have to raise the debt ceiling. And no, this is NOT negotiable, unless we want to trigger another worldwide economic meltdown. The question is, how’s this going to play out, given that it’s highly unlikely we’ll have agreed upon a serious path towards slashing the structural deficit by then.

As for the political repercussions of Republicans voting overwhelmingly for the Republicans’/Paul Ryan’s “Road to Ruin” (I prefer “Highway to Hell!”) plan, let’s just say, I’m very much looking forward to 2012! 🙂