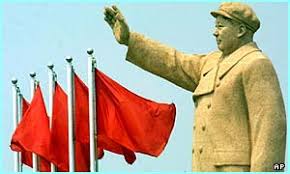 Isn’t it funny how it’s always “ok if a Republican does it?” In this case, Virginia Gov. Bob McDonnell goes a-courting the Communist dictator/thugs/human rights abusers of China, about which one right wingnut/union-busting blogger wrote (note: I refuse to link; Google it if you’re interested) the following:

Gee, Lowell, you’re right. After all, the Communist dictators of China make Adolf Hitler look like a piker, when one compares their relative accomplishments as mass murderers.

I suppose Lowell subscribes to the old Red creed “No enemies to the Left!”

That comment, several years ago, was in response to my making the utterly non-controversial comment that “China’s government undoubtedly does some nasty things in its own country and around the world, but it’s certainly not Nazi Germany.” (duh, right?) In response, this particular right-wing blogger took offense at the “moral relativism from our friends on the far Left, skewed even by their ‘standards.’”

Yet now, Bob McDonnell is slavering all over the baby-killing commies, as the right wingnut-o-sphere might call them, and there’s not a peep of protest, let alone outrage, from them, from Ken Cuccinelli, from Bob Marshall, from Dick Black, etc, etc. No outrage, despite the fact that China’s abortion numbers are through the roof (as high as 13 million abortions a year), despite reports that “dozens of women in southwest China have been forced to have abortions even as late as nine months into the pregnancy,” and despite all the other human rights abuses by the Chinese commies.

But I guess none of this matters when the almighty dollar, or in this case Yuan, is at stake. It also doesn’t matter, apparently, if it’s a Republican – in this case, Bob McDonnell – doing the kowtowing to the commie thugs.  Now THERE are “right-wing principles” for you. Perhaps their slogan should be “no enemies to the Right, whenever profit’s involved.” Ka-ching!