“[I]t’s worth emphasizing that April’s private-sector numbers were the single best Americans have seen since the Great Recession began in 2007,” writes Steve Benen of Washington Monthly. “What’s more, the combined data from February and March shows easily the best three-month stretch in the last five years.”

All told, we’ve had 1.7 million net new private sector jobs over the past year but they’ve been partially offset by 404,000 net job losses in the public sector.

One question here is the wisdom of this. I think it’s been unwise. In the current low interest rate environment, had the federal government engaged in additional borrowing and then engaged in revenue sharing with state and local government, we could have turned those 404,000 public sector losses into zero net losses without any private sector crowding out. What’s more, had we had fewer public employee layoffs those workers would have spent more money on private purchases in their communities and we’d probably have somewhat more retail employment. Most of all, we’re actually now facing something of an objective shortage of houses in America and absent those missing 404,000 public workers we’d be closer to a revival of the construction industry and thus on the path to long-term recovery.

But another issue is simply that this is the recovery conservatives say they want. The balance of economic activity is shifting away from the public sector and toward the private sector. So why is it that we have people running around the country-not just ignorant grassroots folks or talk show entrepreneurs, but billionaire political organizers like David Koch-screaming about incipient socialism?

That is, when Koch isn’t saying Obama doesn’t deserve credit for killing Osama bin Laden, even though Koch-backed John McCain explicitly said in 2008 he wouldn’t do the very thing Obama did if McCain had been elected president. Quite a trustworthy guy, that David Koch.

Another Month, Another Dismal Jobs Report

Budget Matters: A Brief Look at Spending Choices by Virginia on Policing 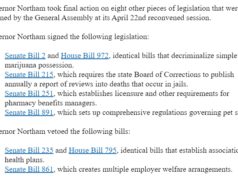 .@AppVoices: "The Atlantic Coast Pipeline was a climate catastrophe and economic boondoggle from the start. The smart investment today is in the people of Central and Southern Appalachia. Not in the resources that might be extracted and exported..." https://bluevirginia.us/2020/07/breaking-dominion-duke-announce-theyre-canceling-the-atlantic-coast-pipeline#comment-4980790154