(There’s so much truth to this. Sadly. – promoted by lowkell) 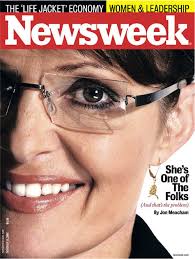 Sarah Palin’s on the rise again, and that frightens me. She frightens me because she allows me to see the sheer power exuding from our 24/7 cable news media, taken together with the various and sundry internet political pundits, who’ve claimed equal professional status with trained and experienced political commentators who should know better.

Ever since the day after she lost the 2008 election as John McCain’s intellectually ill-equiped running mate, she’s been fodder for the news media every day of her ensuing life. For some particular reason, everything Palin does is newsworthy.  I say her “newsworthiness” is relevant only to the degree to which our political society and our society in general have become totally shallow. I would imagine if Sarah Palin looked a lot more like Sharron Angle, she wouldn’t be so newsworthy, unless it were in a pathetically comical way.

The same media who eviscerated Hillary Clinton in the worst misogynistic way follows Palin about like prurient lapdogs. The Rightwing shills revere her; Leftwing commentators’ reactions vary – from presenting her as the butt of jokes to figuring out elaborate equations which would allow her to capture a Presidential nomination without engaging in a debate; still, it doesn’t detract from the fact that they’re fascinated by her.

To a certain demographic, she’s Everywoman. For women, she’s a mother of five, who chose to raise a child with Downs’ Syndrome, rather than abort him. That makes her a heroine.  For men, she dresses up in leather; because they can’t f*** her, they’ll vote for her.

I’ve said all along that she’ll run for President this time around. Now I see the media – MSNBC, no less – validate her by salivating at the prospect of a Palin challenge to the Obama second term.  The media created this, just as they created the last election, making the real contest in 2008, that of a woman challenging an African American man for the Democratic nomination.  Only this time, there won’t be any misogyny, and if it appears from the Left, Palin and her team will quickly exploit it to make herself the victim.  She’s so adept at that.

Vice-Presidential candidates on losing tickets are normally non-entities after the fact. Palin was a rookie governor halfway into her first term when she decided to resign. The event was covered exclusively by the news media as if she were some venerable and long-serving politician of note and repute.  From that moment on, her agenda should have been apparent to everyone. It gave the news media ammunition to speculate, certainly; and that’s what they’ve done ever since.

She appalls and fascinates simultaneously. She’s like the ultra grisly car wreck at the side of the road, the one we swear we won’t look at, but the one we’re drawn to rubberneck for sheer horror of the accident. The same media who were offended in January at her mean-mouthed “blood libel” defence in the wake of Gabby Giffords shooting are marvelling now at her dog-and-pony magical mystery bus tour winding along the roads of Middle America, sowing seeds of political resentment and anger amongst a demographic, which – forty years ago – the Democratic party claimed for their own.

If anything, she’s this generation’s equivalent of George Wallace, winding her way into small towns, rural areas and working-class suburbs of major cities, reminding her eager audiences of how they have America’s heartbeat and how anyone reeking of elitism long ago abandoned their values to the netherlands of inconsequence.

She’s a side show, a carnival barker, a hoyden of ignorance who’s also skillful at subtly reminding people of equal ignorance what differentiates between their real America and the Europhiliacs of coastal elitism, without offering any tangible solutions to these people’s real problems. She doesn’t offer jobs to counter their unemployment; she can’t stop the bailiffs from foreclosing on their family home; but – dagnabbit – she makes them feel good!

She promises them that this President is only enjoying a temporary tenure, and that relief is just around the corner if we can just get him out of a White House in which he was never entitled to live, anyway.

And the media hang on her every word.

They’re spoiling for a confrontation next year, the wet dream of an Obama-Palin confrontation on the campaign trail – the dark-skinned “other”, the spineless college professor against the mean girl, the red-leathered lady who can say and do anything she wants, because no “real man” would punch down on a girl.  And if he did, could we really expect anything from a political demographic whose mouthpieces regularly refer to women as “sluts?”

This media made Palin. They made her as decisively as the faux Professional Left sought from January 21, 2009, to drive a wedge in the Democratic Party with their false prophets constantly criticizing, undermining and inflaming the far Left into the Queen Mother of all hissy fits.

The last words uttered by Palin at the end of the upcoming documentary about her rise is the challenge to our President of “game on,” shrieked in an appearance last month in Wisconsin in support of Governor Scott Walker, where she was flanked by no less than Andrew Breitbart.  The last words on the screen remind viewers that already Palin can see November 2012.

Two months ago, Rachel Maddow correctly predicted that the 2012 election wouldn’t be fought over the economy, but over abortion; and the prospect of a Palin candidacy, especially if she should choose such a running mate as Herman Cain, would be an all-out culture war of race-baiting, Islamophobia and Dominionism – a battle for the soul of America.

Remember that when Fascism comes to America, it will come draped in an American flag and carrying a cross.

Have you noticed the size of the cross pendant Palin wears around her neck?

Yep, VA State Sen. @BillStanley (R) is very, very confused about a lot of things...including how to defeat Amanda Chase and also what the (Trumpian) nature of today's GOP is. https://bluevirginia.us/2020/11/monday-news-astra-oxford-vaccine-prevents-average-of-70-of-covid-cases-biden-chooses-antony-blinken-defender-of-global-alliances-as-secretary-of-state-trump-is-running-out-of-time-as-ke#comment-5162636953