Attention, Ken Cuccinelli: A Vatican-appointed panel of scientists has accepted that the Earth is getting warmer, glaciers are melting, and strong actions are necessary to mitigate the damage to the planet we all share. Not only that, but they titled the report, “Fate of Mountain Glaciers in the Anthropocene,”using a term that some geologists have given to our present age, one that they warn may constitute the sixth era of mass extinctions of life forms on the planet, this time caused by human population and activity.

The authors of the Vatican report called for immediate reductions of carbon dioxide emissions and reductions in methane and other pollutants that warm the air, as well as better observation of mountain glaciers in order to track their changes.

The Pontifical Academy of Sciences hosted a conference in April to ascertain the causes and consequences of retreating mountain glaciers. The final report, dated May 5 and with minor corrections on May 11, can be found on the Vatican website.

The report said, “We appeal to all nations to develop and implement, without delay, effective and fair policies to reduce the causes and impacts of climate change on communities and ecosystems, including mountain glaciers and their watersheds, aware that we all live in the same home. By acting now, in the spirit of common but differentiated responsibility, we accept our duty to one another and to the stewardship of a planet blessed with the gift of life.”

“We are committed to ensuring that all inhabitants of this planet receive their daily bread, fresh air to breathe and clean water to drink as we are aware that, if we want justice and peace, we must protect the habitat that sustains us.”

Will the fact that his church has taken this position affect Cuccinelli? Nah, not unless the Pope makes it one of the key teachings of the church. 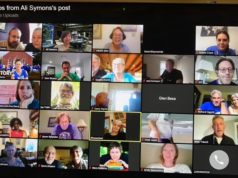 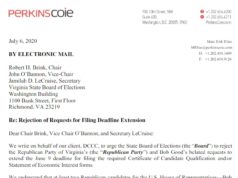 With VA State Board of Elections Meeting Tuesday at 1 pm, PerkinsCoie and DCCC Urge Rejection of Republican Bob Good’s, Nick Freitas’ Requests for...