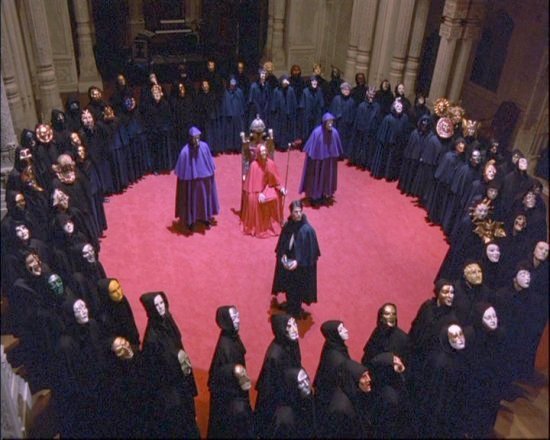 You’ve read the title and are assuming that this is going to be one of those anti-religion rants.  Well, it sort of is but not in the way you are thinking.

America’s very existence is at risk because of a cult with a following from both political parties and members from across the globe.  Their beliefs are, like most cults, rooted in unquestionable faith and a sense of entrapment rooted in fear imposed upon them by their leaders.  Followers who turn their backs on this cult or principals are forever cast out and publicly shamed – forced to wear a scarlet letter.

Reason, logic, and facts are not able to convince members that they need to break free.  Unfortunately even I have family members in this cult, and they don’t care that their actions are harming everyone around them.  I really do not know what to do.  Interventions have failed!

What is this cult?  What is this scarlet letter?  You might assume I am speaking about religion in the traditional sense and engaging in a discussion about Christianity and Atheism, and the letter “A” for adultery.  I am not.

The religion to which I refer to is Globalism and a core tenant of their faith is Free Trade.  The scarlet letter is “P” for Protectionist, or the most insulting name you can call a free trader.

Cults require elements of truth in order to keep the organization together.  Any aspect of the cult that can’t be supported by facts or logic most be supported through fear.  In the case of Free Trade, the fear used most commonly is “Protectionist” and the irrational belief is that one day, some how, the invisible hand will correct all courses.

While international trade when done smartly is a good thing as is free trade under the right conditions, cult leaders take their beliefs to the extreme.

A perfect example of this would be Dan Griswold of Cato explaining why free trade and trade deficits are acceptable in his article that appeared in the Washington Times “Truth about Trade Deficits“:

“A trade deficit doesn’t mean those dollars flowing abroad just disappear. They quickly return to the United States. If they are not used to buy our goods and services to export, they are used to buy American assets – Treasury bills, corporate stock and bonds, real estate and bank deposits.”

Griswold takes the absolute worst aspects of trade imbalances and weaves his little lies.  Lies that will support his globalist agenda and line the pockets of the elite who will benefit.

Instead of presenting our trade of cheap and disposable Chinese products for American assets as a bad thing, he presents this as something desirable.  It isn’t bad that China is exchanging disposable goods that will be filling landfills shortly for a stake in our corporations, our land, our real estate, our banks, and even becoming our government’s biggest lender.  This is all a good thing – and that’s what Griswold, Cato, and their cult-like following want you to believe without question.

Essentially what Griswold is telling his followers is. . .Never mind the deficits.  Never mind the manufacturing and jobs leaving this country.  Never mind the trillions of dollars in debt we are accumulating with foreign nations.  These misleading facts are just presented by evil, know-nothing Protectionists who want to make you believe that debt, foreign ownership, and awesome toys and electronics are bad!  They are really just angels of Socialism sent by Lucifer… no I mean Karl Marx – who is their evil socialist spirit guide.  Don’t be tempted by the Marxists who want to own your soul and tax your unborn!  Remember Smoot-Hawley (the revised history, of course)!!!

The compromise of free traders now is “let’s buy them off with TAA”.  In other words, we’ll send your jobs to China but to help you rebuild we’ll give you a little bit of money so you can go into greater debt at one of those private universities Brian Moran supports.  Between that and another government-backed student loan, you’ll be training to be a nurse, trucker, or massage therapist in no time!  Now that’s the “change” you deserve.

I added a poll below.  Please share your views on global trade and what our trade policy should be.  I suspect that you will be able to form a more coherent and thoughtful argument than Dan Griswold of Cato has.

My view is that Obama’s goal of quadrupling exports is fantastic, however it is only fantastic if we don’t also quadruple imports.  I believe that Obama and other neo-liberal trade supporters forget that there are two sides of the trade coin.  Exports, and imports.  They always accuse anyone wanting parity in trade of being protectionist.  We cannot let our nation to continue being victimized by the free trade cultists.

I’m really not surprised that Obama is being mislead on this.  After all, it’s the same Bush-era people driving our economic policies and encouraging our support of Bush-era free trade deals yet to be signed.  The “Bush-era” part should be enough to persuade you not to support these deals, but if not the primary reason you should oppose the Columbia and South Korea FTAs is that they will lead to more American debt and fewer American jobs.