Here’s a scan (click to “embiggen”) of what a few thousand 31st Senate district voters, myself included, received in the mail today. Also, see below for the Areizaga-Soto campaign’s press release expressing their “dismay that the Favola campaign continues to be fueled by developers who benefited from multi-million dollar projects approved by Favola in her role as an Arlington County Board member.”

Favola approved multi-million dollar project for The Shooshan Company, then accepted $25K in campaign cash from John Shooshan and appointed him Chair of her campaign fundraising committee

ARLINGTON, VA. – Today the Jaime Areizaga-Soto for State Senate campaign expressed dismay that the Favola campaign continues to be fueled by developers who benefited from multi-million dollar projects approved by Favola in her role as an Arlington County Board member.

“Barbara Favola voted to approve a multi-million dollar project for a developer, then accepted a $25,000 check from him and appointed him Chair of her campaign fundraising committee,” said Areizaga-Soto. “As our next Senator, my vote will never be for sale.”

“John Shooshan is a successful businessman and by all accounts a great guy,” added Areizaga-Soto.  “But his unprecedentedly large contribution to Barbara Favola and his fundraising role on her campaign committee indicates a serious lack of judgment and raises ethical concerns about County Board member Favola’s support for The Shooshan Company’s multi-million dollar development projects in Arlington.”

Members of the Arlington County Board have a tradition of refusing campaign contributions from developers because so much of the County Board’s work involves developer interests. 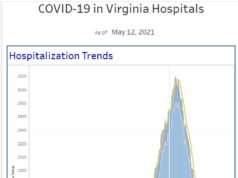 Sen. @ssurovell and Del. @KrizekForVA are 100% correct here; anyone who assumes Dems will win Virginia easily this November, or that Virginia is a solid-blue state, must really not remember how close it was in 2013, or the huge 2009 win for Bob McDonnell. https://bluevirginia.us/2021/05/wednesday-news-the-trump-g-o-p-s-plot-against-liz-cheney-and-our-democracy-for-the-gop-the-only-acceptable-truth-is-a-lie-colonial-faces-deadline-to-decide-on-hacked-pipeline#comment-5380696356

"I asked [Youngkin] if Joe Biden had been legitimately elected. This led to several minutes of dodging...Finally, on my third or fourth try, he said "of course" (but then added some other stuff, so not 100% certain he meant to legitimize the election)." https://bluevirginia.us/2021/05/wednesday-news-the-trump-g-o-p-s-plot-against-liz-cheney-and-our-democracy-for-the-gop-the-only-acceptable-truth-is-a-lie-colonial-faces-deadline-to-decide-on-hacked-pipeline#comment-5380694367