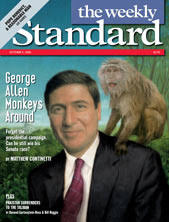 Ah, Jeff Frederick…the gift that keeps on giving. To Democrats, that is. 🙂

Frederick’s reaction to Allen’s endorsement of his future oppnent [Tito “The Builder” Muñoz]: “I‘m not running to please the political establishment, I’m running to change politics as usual in Virginia,” he said. “The people of the Commonwealth are looking for an independent voice who is not beholden to any political class or special interests. I will always put people above politics. It is unfortunate that others in this race have decided to stand with some of the very career politicians that got us into the mess we’re in, with bigger government, massive spending, and skyrocketing debt.“

What’s great about this quote by Frederick is that it’s absolutely true: George Allen — almost certain to be Virginia Republicans’ nominee for U.S. Senate in 2012 — is nothing if not the “establishment.” Also, George Allen absolutely played a major role in all the things Jeff Frederick charges him with, having voted 97% of the time with George W. Bush as he turned Bill Clinton’s surpluses into massive deficits. It’s all true, it’s just that usually, it’s Democrats calling out Allen for his miserable record of failure. Now, it’s also the former Chairman of the Republican Party of Virginia, Jeff Frederick. No wonder why they fired him – speaking the truth is not appreciated in that party these days, whether it’s about climate science, the debt ceiling, the Ryan plan to demolish Medicare (ask Newt Gingrich about that one – lol), or the utter hypocrisy of people like George Allen!