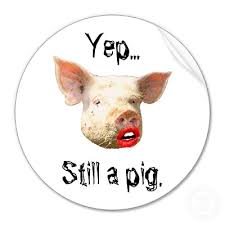 The internet was a-flutter yesterday with “news” that we had a “plan.” But it was lipstick on the Bowles-Simpson pig. All we really need (for now) is to raise the debt ceiling. Then immediately thereafter, we need to do something about jobs. We could have a long-term deficit reduction package once the job situation is on a sounder footing and 2012 electoral politics fade.

But the deficit hawks have something else in mind–to use this moment to undo nearly one hundred years of progress. And the GOP version of the deficit hawks also want Presdident Obama to be a one-term president. It started out simply enough.  Yet at each step the Dems have raised the TeaPublicans. From a $37 billion deficit reduction down payment now and a couple trillion later, things have escalated to $500-billion-cut down payment and almost $3.7 trillion in cuts later. But Paul Ryan’s plan is toast. Bowels-Simpson (BS) failed to get the necessary votes. Now when even Reid-McConnell’s demand for $1.7 trillion in deficit reduction has hit the skids, the extreme draconian ax cutters should have had their day in the sun and slinked off into the woods.

Enter Mark Warner to do an end-run around the process and breathe new life into the BS plan.

Yesterday the “Gang of Six” morphed into a mob (of 50-60), glowed Joe Manchin (D-WV), which gives you an idea that we should run for cover.  The deal HuffPo and others call a “new deal,” is a pitiful pretender to the real New Deal, which actually was a benefit to the Middle Class. The Warner plan cuts the marginal rates for all income levels, but the wealthiest taxpayers down to 23%-29%.  He mentions corporate tax cuts, with vague promises of reforming the tax code. However, he doesn’t include any of the main fixes to corporations dodging paying their fair share–no tax for hedge funds, no closing of the biggest loopholes, no closing of the provision rewarding the off-shoring of US jobs.

He includes eliminating, rather than tweaking the AMT. Fixing it for those increasingly affected middle class couples is one thing. But eliminating it adds $1.7 trillion to the deficit, which must be made up elsewhere, i.e. from the rest of us. Expect it to be harder to deduct health care expenses and home mortgage interest.  There are promises to reform “tax expenditures” (exemptions and giveaways), but few specifics. The specifics were saved for the stealth quasi-balanced budget proviso.

But the “plan” would require a 67-vote majority to change, exceed, or override the caps. The 67-vote supermajority also would be needed the next time the debt ceiling needs raising!  This is tantamount to legislating a balanced budget amendment without ever having to actually do the work. This is how to gut and destroy Social Security while pretending to take it out of the deficit talks.

Similar, but not identical, constraints have brought the California legislature – and the (formerly) Golden State in general – to its knees, with its cascading job losses and massive changes to state services. At least there, though, the supermajority requirement was voted upon by the public, however misguided they were. This hamstringing of Congress and the president is a disaster in the making. I do not understand how a constitutional lawyer such as the president could support this. It eliminates any possibility of our government dealing with emergencies, and is a setup for raiding the Social Security trust fund when things get tough. That is done now, but only with repayment plus interest, not anymore if Warner’s plan goes through.

In addition to the talking points on tax cutting and deficit cutting, Warner’s “plan” most approximates a procedural outline, which far exceeds the normal budget-making authority of a single bill or even a “package.” Astoundingly, in addition to forcing a supermajority of 67 votes to raise pending above caps, it sets into other law Senate procedures, thus disempowering the Senate leadership. It does not permit filibuster.  I want filibuster reform, probably more than the next person, but not this way. Warner also includes a nifty way to allow his Gang of 5/6 to do an end-run around the committee structure (read the so-called plan).

The Warner plan claims to take Social Security out of the deficit reduction process by creating a new commission to deal with it later. But his plan attempts to turn Social Security into a welfare program, despite that we pay into this program throughout our working lives. He specifies that the basic benefit for Social Security shall be 125% of poverty. He also changes the way COLAs are calculated by inserting a “chained” COLA (talk about using a bondage metaphor). This punishes you more the older you are by predicating the change on the false assumption that the older you get the less money you spend. But it misses the point: The older you are, the higher health care costs, including out-of-pocket costs. And they trump everything else. Dean Baker says the chained COLA would reduce checks for 90 year olds by 9%.  The problem with this is that the older one is the more medical expenses, including out-of-pocket ones.

As CBS reports, a supermajority of Americans (66%) want tax increases included in any deficit package. Is anyone listening? The bait-and-switch is escalating fast, but the potential ramification are grave. Read the “plan”. Then write your representatives about this runaway train. Jamming such a complex and constraining plan through at the last minute is an Rx for disaster.