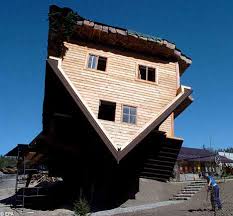 Yes, our country is upside down

We’re told we all must sacrifice, as if the wanton recklessness, illegal, borderline-illegal, and immoral activities of Wall Street, were not the causal factors. Only the Middle Class and the poor are expected to “sacrifice” so the rich can get richer. Ironically, now just this week talking heads blame consumers for the economy’s downturn because we are not confident enough.  Yep it’s our fault (snark).

Corporatists taught the world how to gut an economy through credit default swaps, leveraged buyouts stripping away value, and giving Wall St a free hand to turn itself into a gambling casino, defraud its investors, and promote fake ratings of said investments. They sold junk and then bet against their duped investors. The economy’s also due to US companies’ lack of confidence “because of the deficit,” says Maria Barteromo (how did she ever get hired? What an idiot!  Or a corporatist drone, as the case may be.) It just goes to show, as Sarah Palin already has, that you don’t need to know anything to be a TV commentator.  And, btw, why aren’t real economists working on our nation’s problems?  Thirty years of evidence disproves supply-side “economics,’ but our leaders (even the president) clearly subscribe to it.  The world is upside down.

Adding insult to injury, the insipidly smirking, cocky, and ageist Tom Brokaw went on an ugly tirade showing just how overpaid and nasty that fat cat media talking head can be. He says the economic problems we face are the baby boomers’ fault, because, among other things, apparently, they just exist and because they live too long.  This comes from perhaps biggest purveyor of intergenerational myth-making ever. In one brush stroke he tried to obliterate a generation which WAS NOT the stereotype he claims it was. Most of them studied, graduated, got married and had kids. They held jobs.  They were engaged in and contributed to our communities.

Contrary to most of Americans in the Boomer generation did not tune out and drop out.  Instead of focusing on the truth, Brokaw spun a narrative for one of his narrow, ageist specials. Why talk about all of the ordinary lives of ordinary people when one can instead portray a whole generation as dropped-out losers. (What an a-hat.) There’s money in his water-carrying and it fits the drown-government-in the-bath-tub agenda. In his view, Boomers don’t deserve fairness and decency by their government. But, you know, rich boy Brokaw should not have to have his (now decreased) taxes raised back to what they should be.  No, sirree.

Remember how Alan Simpson rippped seniors?  The buzzard, ironically named to the deficit commission despite his party’s never finding a tax cut they couldn’t love, nor a deficit they wouldn’t pump up, just can’t insult us enough.  His and his partner, Erskine Bowles’, Wall Street buddies soaked all of us and brought the economy down, but he blames Boomers, so he can justify slinging catfood at us instead of hash.  Meanwhile, he complains there are 300 million sucking the government’s “tits,” never mind that voters paid for their programs with payroll taxes.  Also, meanwhile, he takes a comfortable government pension-with no means testing, thank you.

Consumers have been hammered by the housing bubble, lost jobs, seen their extended unemployment benefits voted down, can’t get health care, will now have a less secure retirement and are under constant threat that when they  are old they will be on their own.  But it’s their fault?  And remember that 2 trillion corporations won’t use for jobs for the real reason that they don’t want job growth under President Obama.  NOT OUR FAULT.

Social Security has been put on the table and thrown under the bus by those purporting they would “strengthen” it.  The country is upside down.  The folks doing this pretty much torture the nation’s old people by their ongoing threat to take away their old-age pensions, to repeat (because it keeps getting eclipsed), paid for by deductions from their paychecks. These same torturous folks say that, because of the deficit, Social Security “must be cut.” As I have said until I am “blue in the face,” Social Security has never contributed one penny to the deficit.   Elder abuse at this point has become a Republican and triangulating Democrats’ meme. We don’t need to keep our promises, says Eric Cantor. Never mind that the government took our money to bind that contract. A promise isn’t a promise.  Our country is upside down.

A jobs “program creates no jobs.  An education “reform” agenda aims to dismantle public schools.  The Clear Skies Act predictably made our air dirtier.  And Operation Iraqi Freedom has made us less safe and less free.

The “recovery” was a “jobless recovery.”  Corporations are sitting on two Trillion and deliberately stifling jobs (ie laying off workers). But it’s the deficit that’s causing our economic woes? The GOP and our own gutless Democrats lie that massive cuts in revenue will add jobs. You and I know there never will be any new revenue. The country is upside down. As Paul Krugman notes it is a lack of confidence in our government’s building a growth economy that’s responsible.

We are in a time when Republicans take pleasure in wiping out programs and motivate each other by watching movies which brag they are going to “hurt some people.” The president seems to get a special joy about doing big budget cuts himself. But his latest creation, the budget deal, has made it worse, both for those it hurts and the resulting negative impact on jobs. But somehow that must be our fault too. They’ll find a way to blame us.

And, in another example, with no sense of irony, the President ripped his base, the very people (including moi) who turned out to support him and cheer him on last time. The President dissed Nancy Pelosi by cutting her out of talks. And he dissed the entire progressive caucus and its Progressive Budget. But somehow he’s a uniter.  The views of the majority were excluded from the conversation. And their over and over again expressed opinion that Social Security, Medicare and Medicaid (among other programs) should not be cut was rewritten by the White House as Americans want “compromise.”  Not exactly.  The country is upside down.

Ironically, though, corporations “are people” and can spend campaign money like people (but don’t have to abide the laws real people must. Take, for example, the apparently dummy company set up for the expressed purpose of donating one million dollars to Mitt Romney.  But real people are strictly limited to the total they may contribute, not that many of us are in the donor class these days. Even fewer Americans are in the donor class now than before GW Bush took office.  And it’s not likely to get that much better.  Indeed, given he destruction of the safety net since 2010, things are likely to get much worse.  Corporations  also don’t get prosecuted like real people, even when they preside over a firm committing the greatest corporate fraud ever perpetrated against Medicare.  (And the CEO gets to be governor of Florida.)

We elect our politicians and for some inane reason we think they will represent us when they go to the statehouses and to our nation’s capitol. Ever the dreamers, we believe that this is how representative democracy works. And then we learn that we have no representation at all.  No one has our backs. Given how clearly off track was the administration of George W. Bush, I never believed things would still be this upside down in 2011.  But here we are.  Will things ever be set ‘right” again?

For all this we hold this country and her possibilities dear. We search for our own possibilities. I do not know what the future holds. I will always consider myself a Dem. I will always vote Dem. But right now, I hear a somewhat different drummer than just party politics.  I am seriously thinking of joining Van Jones’ American dream movement. Most Americans need and deserve such an effort because their voices are not being heard.

I can still throw a figurative blogging punch at TeaPublicans. And I will here at BV. But things are different now. And, looking at the rubble that is the unfolding deficit bill/SuperCongress disaster, I keep wondering what is left. More of us need to speak out and get involved and not just in election politics, but in change politics. And not the change we can no longer believe in.  Real change.  Re-elect Barack Obama, and a Democratic (hopefully more progressive) Congress, but don’t think that’s all there is.  It isn’t. The country is different now.  It’s “democracy” upside down.