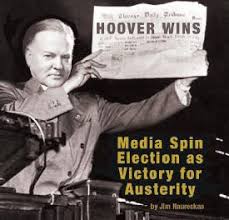 If you know anything about economics – and I’m not talking graduate-level Macroeconomics; Econ 101 will do just fine! – you know that gross domestic product is comprised of four main elements. Just to demonstrate how non-partisan this concept is, I’m going to quote Too Conservative’s “Cato the Elder” on this one:

A bit more “Econ 101”: In a recession, when “C” and “I” fall, about the only thing that can make up the difference is “G” — hence, Keynesian economics. And, clearly, unless you flunked Econ 101, you know that cutting “G” during a recession – aka, “austerity” – is THE LAST THING you’d ever want to do. In fact, cutting “G” during a recession would be the EXACT OPPOSITE of what any serious economist would recommend. To the contrary, as Joe Nocera reminded us all the other day:

We’ve all heard what happened in 1937 when Franklin Roosevelt, believing the Depression was over, tried to rein in federal spending. Cutting spending spiraled the country right back into the Great Depression, where it stayed until the arrival of the stimulus package known as World War II. That’s the path we’re now on. Our enemies could not have designed a better plan to weaken the American economy than this debt-ceiling deal.

I’d actually disagree in part with Nocera’s final clause, for a few reasons (e.g., spending cuts don’t really kick in 2011 or 2012), but I DO agree that the last thing Washington should have been focusing on the past few months is the short-term deficit (instead, they should have been extending unemployment benefits and passing other “countercyclical” policies), as opposed to the long-term, structural debt problem.

In fact, despite the howling from a lot of uninformed/duped people out there, those two things are not very well connected. Thus, our short-term deficit is driven by: a) extension of the Bush tax cuts, at a cost of $400 billion a year; b) the ongoing wars in Iraq and Afghanistan; c) the one-time-only “stimulus,” now winding down; and d) the recession itself, which has cut economic growth and, thus, tax revenues.  In contrast, long-term structural debt is driven overwhelmingly by one thing: spiraling health care costs. And guess what this latest debt deal does NOT address? That’s right, spiraling health care costs. Great work, guys!

So, what are we left with at this point, as stock markets around the world plummet and the world economy teeters on the edge once again? “Austerity.” And not only “austerity,” but “austerity” for absolutely no purpose, other than the radical, counterproductive, extremist Teapublican/Norquistian, “drown-government-in-the-bathtub” ideology that seems to pervade Congress right now, unfortunately.

The problem with deficit reduction (not even much of that, really) and “austerity” in a “down” economy, or even in a situation where we’re headed towards a “double-dip recession?” As libertarian Cato the Elder points out, “if we reduce spending as rapidly and as deeply as most of [the Tea Partiers] want, it will certainly throw us back into recession and quite possibly depression.” Or, as John Atcheson at Common Dreams explains, the Teapublican’s relentless “starve the beast” assault on the hated (by them, for god knows what reason) “gubmint,” has accomplished two main things: “profound income inequalities and the severe economic downturns that inevitably follow.” Or, to put it another way:

Do the thought experiment yourself: what if Al Gore had been president starting in 2001, instead of George W. Bush? What if John Kerry had beaten Bush in 2004, which he would have if a couple more million Democrats had gotten their butts to the polls? What if the Tea Party hadn’t romped in 2009 and 2010 (again, if Dems had taken a few minutes and performed their civic duty)? Also, not to let the Democratic Party completely off the hook: what if we had elected real Democrats (from the “Democratic wing of the party”) instead of conservadems — the people who helped keep the “stimulus” from being large enough and tailored properly; who kept health care reform legislation from REALLY “bending the cost curve,” by including a public option or even going to single payer; and from instituting a cap-and-trade system to put a price on carbon pollution, raising large amounts of revenue in the process?

How would things be today if we had voted in large numbers for Democrats, and progressives, over the radical “drown government” crowd?  One thing’s for sure: they’d be a lot better than they are now! Instead, we’ve got the LAST thing we’d ever want: austerity, combined with almost no fiscal or monetary tools at our disposal, as we face a potential “double dip” recession.  Again, I’d just like to thank Teapublicans – and, to an extent, conservadems – for all that. You guys rock. Or, actually, not. Carry on…

.@VASTATENAACP: “These acts of voter intimidation are illegal, and Virginians deserve to be able to cast their vote without fear” https://bluevirginia.us/2020/09/virginia-naacp-these-acts-of-voter-intimidation-are-illegal-and-virginians-deserve-to-be-able-to-cast-their-vote-without-fear via @bluevirginia

Video: @QasimRashid addresses "the latest TV ad put out by my opponent, Rob Wittman, attacking me for my faith & calling me 'radical'. It is reprehensible, yet speaks clearly to his inability to speak to the issues and his own record." https://bluevirginia.us/2020/09/video-appallingly-dishonest-demagogic-disgraceful-performance-by-rep-rob-wittman-r-in-final-va01-debate