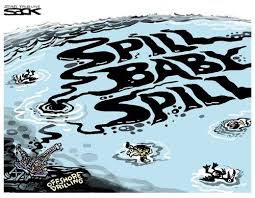 Is this energy summit, being held on October 4 in Alexandria as part of Bob McDonnell's newly-announced "Energy Month" in Virginia, supposed to be satire, a bad joke, or is McDonnell actually serious? Just a few problems here. First, check out the people on the panels, listed below. Can we get any more biased, against clean energy and the environment, than this?!?

A few comments. First, where are the advocates for clean energy? Where are the voices for energy development that's safe for the environment? Where are the non-corporate voices? Where are the regular Virginians who would be harmed by oil spills, global warming, mountaintop removal coal mining, etc?

Second, check out the wildly slanted/biased (pro-dirty-energy, anti-clean-energy and anti-environment) blurbs describing the panels.  For instance, stated as fact in the blurb on oil and gas development implies that oil prices were high last summer because we're not drilling fast enough off our coasts. That's completely false, according to pretty much every unbiased analyst who's looked at this. In fact, the miniscule amount of oil off the Virginia coast wouldn't impact gasoline prices more than a couple pennies per gallon, max, and not for many years even at that. And even if we drill off of all the U.S. coasts, it's still nothing in the context of world oil markets. For instance, see here and here and here and…we could go on all day. McDonnell's claim about offshore drilling and oil prices is just wildly, pants-on-fire false. End of story.

Then, there's the howler in the nuclear section that "nuclear plants produce the cleanest, cheapest, and most reliable electricity available in the world today." Yet, as even this biased description in the preceding sentence admits, "Construction of new nuclear facilities is extremely expensive and takes almost a decade." Uhhh. Also note that companies and countries around the world are now phasing out their nuclear power programs (Siemens recently announced that it was getting out of the nuclear business completely), while rededicating themselves to energy efficiency, solar, wind, etc. But not here in Virginia, not with Bob McDonnell in charge. What a pathetic joke.

Finally, the description of the panel on "EPA Regulations and Impact on Energy and the Economy" sounds like it came straight from the Koch brothers, ExxonMobil, the Tea Party and the coal industry. Lie after lie after lie, how protecting our environment and shifting to a clean energy economy not only won't be the huge opportunity that we know it will be, but will actually "steeply increase the cost of power, and  undermine our ability to generate sufficient power to meet demand."

Bottom line: Bob McDonnell doesn't get it at all. Actually, he does "get it," if we're talking about "getting" huge wads of cash from the dirty energy industry, hanging out with the Koch boys and "getting" his pro-dirty-energy lines straight from them, etc.

P.S. For someone who actually does "get it" in terms of where we need to go on energy, check out Wednesday's Diane Rehm show interview with economist Jeremy Rifkin, author of “The Third Industrial Revolution: How Lateral Power Is Transforming Energy, the Economy, and the World.” Perhaps, instead of wasting everyone’s time at his absurd energy summit, Bob McDonnell might take a few hours and actually educate himself. Ha, what am I talking about, does anyone think bought-and-paid-for dirty energy hacks like McDonnell, George Allen, etc. actually want to learn, as opposed to just serve their masters? Yeah, right.

And yet again, they're baaaaaack. Can't wait, huh? https://bluevirginia.us/2021/10/wednesday-news-case-closed-99-9-of-scientists-agree-climate-emergency-caused-by-humans-democrats-scaling-back-budget-bill-press-for-compromise-by-weeks-end-1-6#comment-5577640088