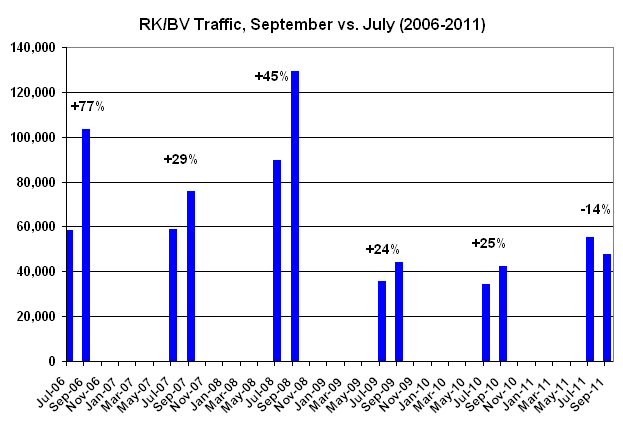 Earlier today, I crunched some numbers and put together this graphic of RK and Blue Virginia traffic statistics (Sitemeter visits, to be consistent) for July and September going back to 2006 (I have only spotty stats for 2005, but I clearly remember that there was a big spike in RK traffic from the spring to the fall that gubernatorial election year). I ran the graph by several Democratic friends, and they all had the same basic reaction: this is NOT good at all! (one friend expressed it as “danger Will Robinson”) What’s the problem? A few points.

1. Since 2006 (actually since 2005), Virginia progressive blog traffic has ALWAYS increased sharply between the dead time in the middle of the summer to September preceding the general election (and yes, Virginia, it’s always an election year in this state). For instance, traffic on RK increased 77% from July 2006 to September 2006, and 45% between July and September 2008. Even in 2009, with close to zero enthusiasm for Creigh Deeds, traffic was up on Blue Virginia by 24% from July to September.

2. Perhaps the most relevant comparison is to what happened in 2007, the last “off-off-year election” in Virginia. In that year, RK traffic increased by 29% between July and September; exactly as one would expect as we move closer to the general election, and as political junkies and activists start to really tune in, look for information, etc.

3. In sharp contrast, this year, BV traffic is actually down by 14% from July to September. Of course, the primaries were in August this year, not in June as they usually are, so that might skew the results somewhat. However, BV traffic is also down from February-April 2011, and basically flat from June of this year. In other words, interest in the general election among BV readers actually appears to be declining as we get closer to the general election. WTF?!?

Lots more on the “flip,” including strong evidence that this isn’t just happening at BV, or in the Virginia progressive blogosphere, but pretty much across the board.

4. What’s going on here? Why the different pattern this year from every other year going back to 2005? My theory: core progressive activists and Virginia political junkies are simply not enthused this year. At all. Truly abysmal.

It’s important to point out that this phenomenon is not unique to Blue Virginia. For instance, according to Sitemeter traffic statistics, Not Larry Sabato is down this year from July to September, by 24%. A relevant comparison for a previous year might be May 2009 (the month before that year’s primary elections) to September 2009, when NLS traffic increased by 15% (NLS traffic also increased sharply from July 2009 to September 2009, as well as from May and July 2010 to September 2010).

What about October so far, halfway through the month and with just over 3 weeks to go until election day? Also not looking good: Bearing Drift’s on track for about 28,000 visits, down from July, and BVBL’s on track for about 15,000 visits (also down from May and July). Same thing with BV and NLS, both experiencing slow months so far in October, with just over 3 weeks to go before the general election.

I asked former Arlington County Democratic Committee Chair Peter Rousselot what he thought of this graph. Here’s his response:

—the year by year comparison, 2006, 2007, 2008, tells me what I would expect in terms of activist interest: highest in a Presidential year, next highest in a non-Presidential federal year with both Congressional and Senate races on the ballot, lowest in the Constitutional year with only state-level offices on the ballot. The comparison between June and September tells me that there is a spike in interest as the general election approaches.

—another striking thing: I would have expected the 2009 graphs to be substantially higher than the 2011 graphs. Instead, they are pretty close. That tells me that Creigh Deeds truly failed to excite the Democratic activists as the general election approached.

OK, you’re saying, this is all interesting, but how meaningful are blog traffic numbers? I’d argue that they’re meaningful statistically, in that they strongly correlate with other metrics of activist/political junky enthusiasm and engagement. For months now, I’ve been hearing anecdotally that Virginia voters are turned off of politics, that they pretty much hate it, see it as toxic, have no enthusiasm for it, etc. Also, looking at money and other indicators like press coverage, there really just seems to be no excitement for these crucially important Virginia elections. And again, it’s not just on the progressive side, although anecdotally, I’m hearing that there’s somewhat more enthusiasm among Virginia Republicans than among Democrats right now. Republicans also have a LOT more money flowing into the state than we do.

So, where does this leave us? Basically, not in good shape. If Virginia Democrats and progressives remain unenthused the next three weeks, from what I’m hearing – and also in my own judgment – it’s quite possible that we’ll lose 3-8 House of Delegates seats and stand more than a 50/50 chance of losing the State Senate as well. It’s not inevitable, of course, but this is crunch time. If we wake up now, we can still salvage this situation. If not, we can look forward to single-party Republican rule in Virginia, with crazy legislation of all kinds coming down the pike in 2012. It won’t be pretty if it happens, but it’s still avoidable. Not if we stay comatose and discouraged, though.