All of us in southwest Virginia know about the musical chairs that Republicans are playing in their attempt control the State Senate. It all started when the Senate put Ralph Smith and Steve Newman in the same district, creating a new district east of Lynchburg. Smith vowed to run somewhere, so he rented a cabin in the district currently represented by Bill Stanley. To oblige him, Stanley rented a house in Democrat Roscoe Reynolds’ district and is busy running for that seat. Now, a glitch in Smith’s little plan is being exploited by his opponent, Independent Brandon Bell, who once was beaten in a primary by Smith when Bell was the GOP incumbent.

Bell has uncovered information that indicates that Smith may be trying to skirt the Virginia Constitution and the regulations of the State Board of Elections by simply pretending to live in Roanoke County. The board explicitly says that a person must have an “actual physical place of abode” and be “domiciled” there. To have a domicile for the purpose of running for office, “a person must live in a locality with the intent to remain there for an unlimited time.”

When the Roanoke Times checked yesterday, Smith’s rented cabin had all the blinds drawn, leaves in the driveway that were obviously undisturbed by vehicle traffic and a trash can at the curb containing only a September 28 copy of the Times. Bell drew the obvious conclusion. Smith spends little, if any, time there.

“I think it’s fair to ask the questions as a campaign at this point and to have those answers come forward,” Bell told the Times in an interview.

Brandon Bell is a moderate Republican much like the first post-Reconstruction Virginia GOP governor, Linwood Holton. He was driven out by the extreme wing of his party after he introduced legislation to make restaurants smoke-free. In that election Ralph Smith also played musical chairs, moving from Roanoke City to Botetourt County. It’s now time for voters to tell Ralph to pack his carpetbag once more and go home to wherever he really lives. 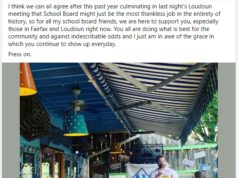 “What does someone identifying themselves a certain way or loving someone do to you to make you so viscerally angry all the time?”

Glenn Youngkin Cowers in Fear of Debating Terry McAuliffe ("Youngkin attacked candidates who 'selectively chose' not to show up to debates before selectively choosing to hide from debates") https://bluevirginia.us/2021/06/glenn-youngkin-cowers-in-fear-of-debating-terry-mcauliffe