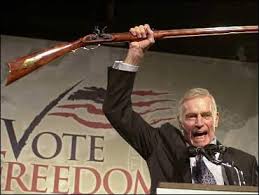 Thank you NRA! Why do I say this? Because they’ve saved all of us a lot of time and effort. Through their ratings of Virginia candidates, we all now know who we should vote for and who we shouldn’t, really without any further effort on our part. Basically, it’s one-stop shopping: anyone who gets an “A” rating from the NRA shouldn’t even be considered, while anyone who gets a “D” or “F” should jump to the top of your preference list.

To understand what these letter grades mean, and why they’re the exact opposite of how you normall think of grading, check out the NRA candidate questionnaire which has items on it like: repealing Virginia’s one-handgun-per-month law; allowing unfettered “sale, purchase, possession and transfer of semi-automatic firearms;” preventing doctors from “questioning patients about firearm ownership;” opposing “legislation requiring locking devices (safes, trigger locks, cable locks…) or other locking procedures for firearms stored in the home;” etc. That’s some extreme stuff right there, and that’s how you rack up an “A” rating with the NRA, by answering those questions “correctly.” A few interesting races where the NRA rating should make a big difference in how you choose to vote?

*Senate District 34: Chap Petersen (C+ rating) vs. Gerarda Culipher (A- rating). Vote Chap! (although Chap’s rating is too high for my liking, he’s still better on this issue, and on every other issue, than Culipher)

*Senate District 37: Dave Marsden (F rating) vs. Jason Flanary (A rating). Do NOT vote for Flanary!

Remember, an “A” from the NRA rating means the person supports the wildly-out-of-the-mainstream items I’ve listed above. A “D” or “F” rating from the NRA is truly a badge of honor, as it means the  candidate opposes the NRA’s extreme agenda, in spite of that organization’s huge amount of money and organized supporters. Despite that fact, of course, the NRA and what it stands for remains in the small minority of Americans, the vast majority of whom support reasonable gun safety measures. Hopefully, that quiet majority will show up on November 8 and express their preferences accordingly.

Looks like a great event, check it out! https://bluevirginia.us/2020/09/monday-news-us-to-hit-200k-dead-trump-sees-no-need-for-regret-from-trump-no-respect-for-ruth-bader-ginsburg-or-the-rules-justice-ginsburg-is-gone-but-democracy-must-survive-faceboo#comment-5079161587