When Virginia entered the 21st century, the basic roles of the Attorney General and Lieutenant Governor had not changed since the beginning of the modern era. No more. Republican AG Ken Cuccinelli, and his 2009 ticket mate LG Bill Bolling, are redefining the offices. This makes 2013 the first election since 1985 when all three offices may present fascinating races of a most unique importance.

This comes as no surprise in regards to KC, who promised as much, albeit mostly unappreciated, in his AG campaign. For most of the state’s history, the AG’s office was part-time, basically issuing legal opinions requested by local officials and taking care that no one in state government, much less the judiciary, might render some form of deed or action which questioned the legality, indeed the morality, of the state’s infamous “Black Codes”, the statutory basis of segregation.

But under Democratic Attorney General Andrew Pickens Miller, the once sleepy office began to expand into a full-time job with a growing staff of lawyers assisting state agencies trying to keep up with a developing new Virginia. Called a “museum piece” by famed Harvard political scientist V.O. Key because nothing ever changed, the Commonwealth set a course to become the major state it is today.

It wasn’t long before the first woman, Mary Sue Terry, held the office, having been elected in part on a promise to use her position to crack down on drunk driving, a major break with the tradition of the AG not being such an advocate as in many other states. Yet this MADD – Mothers Against Drunk Driving – type of focus didn’t alter the basic nature of the Office of Virginia Attorney General. By and large, it remained the lawyer for the state government, with a bit of consumer activism. Except when an AG got crosswise with either the sitting Governor or saw a good political opportunity to boost their future chances of being Governor, they mostly stayed out of the line of political fire, content to do their jobs and concentrate on how to move up the ladder.

Then came Ken. From the moment he took office, KC and his not-so-Sunshine Band decided to go places AG’s just had not gone before, even when pushed. Where other AG’s had invariably waited to be asked for an opinion, Mr. Cuccinelli decided to skip the middle man and put pen to paper, starting with his letter saying however noble the intention, our colleges and universities didn’t have the power to offer gay or other students any more legal protections than authorized by the General Assembly.

Soon his office was in hot pursuit of all things deemed to be Un-Cuccinelli. Not since Patrick Henry decided his “give me liberty or give me death” speech had ushered in a great revolution but a really bad Constitution, has the top legal officer in the Commonwealth tried to roll things back to prior to that fateful Ratification Convention. That’s where James Madison pulled off an upset by getting his handiwork approved by the assembled delegates, a majority elected on a basically anti-Constitution platform.

Life began to imitate art as the “World According To Garp”, the best-selling novel, morphed into the U.S. Constitution according to Cuccinelli. In a bold political move never tried, much less contemplated by a Virginia AG, the “Cooch” stiff-armed all the other state’s attorneys general by filing his own suit against what he called “Obamacare,” or I suppose “Obamaromneycare” in his eyes. KC found a friendly local U.S. District Court Judge, and before long, Mr. Cuccinelli had drawn first blood as Judge Henry Hudson gave Virginia’s AG a big legal win, at least headline wise.

For the first time in Virginia’s history, the Office of Attorney General had become a mini-governor in the legal realm, seeking out never-ending dragons of liberalism, even worse moderation, to slay. He became a conservative talk show guest icon, seemingly spending more time on the Fox channel and other such broadcasters of the true faith than with his family (or his job). He was everywhere in the conservative 24/7 Commentariat, getting more airtime than most candidates for the GOP nomination for President.

Long story short: There has never been a Virginia AG who so redefined the office, especially in the public’s eye, than Mr. Cuccinelli. If you missed his latest missive for good against evil, no need to worry: sit tight, another will be issued shortly. On the activism scale, he has been more active than perhaps all the previous AG’s combined in terms of sticking his finger into politically ticklish areas.

Given this reality – and Mr. Cuccinelli’s attendant popularity in the GOP base – it perhaps was only a matter of time before rival Bill Bolling decided he needed to up the level of his game. Only the second LG to run for re-election in the modern era, Mr. Bolling had been previously sleeping like a baby, a 2009 promise from the Kenster not to run for Governor. On occasion, Mr. Cuccinelli would indicate it might not be a promise the LG could take to the bank, indeed there might not be any such guarantee at all. But the history of the state suggested Governor McDonnell would back his LG’s play, and given McD’s popularity, it seemed doubtful KC intended to call anyone’s bluff.

Then 2010 brought the second straight GOP Tsunami across the state, wiping out three incumbent Democratic congressman, followed this November with the Republicans winning an even bigger  majority in the House of Delegates, along with two big upsets of key Democratic State Senators. Suddenly, the General Assembly’s upper chamber was 20-20. This had happened before, with both sides agreeing to a power-sharing agreement. The role of the LG in an evenly divided Senate, as a matter of constitutional law, is not a settled subject here in Virginia, since the last time it happened in 1996, the party’s decided to be humble, not rumble.

But like any LG, Mr. Bolling has been eager to do more then stand in the Governor’s shadow, hoping for some assignment, or otherwise sit in the presiding chair of the Senate, catching up on his sleep except to bang the gavel on occasion, saving the state from having to buy a Made in Japan/China/Korea robot capable of doing the same thing. True, he gets to break an occasional tie vote. But otherwise, his position, once powerful, has been reduced to smiling for four years in hopes of it being a stepping stone to the Governorship as it has 5 times since the passage of the 1965 Voting Rights Act. Only one LG who managed to get his party’s nomination has lost in this nearly 50-year stretch.

Bill Bolling’s nickname might be “Twinkie” due to a sweet spot, but he understood that Mr. Cuccinelli has no intention of sugar-coating the LG’s path to the Governorship. In the modern era, the only person who never served in previous elected office – Mark Warner – has ever been elected Governor. So Bolling figures Cuccinelli says 2013 might be a good time to run, with Democrats scrambling right now to field a statewide ticket, and Governor McD’s popularity in the Warner range. So if the LG figured when it comes to the GOP gubernatorial nomination hence, he might not be Bolling Alone.

Bolling’s advisors, Boyd Marcus and Ray Allen, don’t scare from a fight. So they have convinced the LG to do something never before tried in state history: turn the LG into the second most powerful person in Virginia politics.

In a flip-flop that would make Mitt Romney blush, Mr. Bolling has gone from crying “foul” to “fair” when it comes to the constitutional power of the LG to….well… be amazingly powerful. Suddenly, contrary to what the GOP said only a few years ago, they now find the constitutional power to treat the LG as effectively a member of the Senate, sort of  Super Senator despite direct language of the Constitution and several previous AG opinions.

But they have seized on precedents from Washington of all places, along with another part of the State Constitution to say in effect: look, we were wrong in 1996, then-LG Don Beyer (D) did indeed have this power.

Before you write them off as Gingrich-lite hypocrites, let’s concede Democrats back then had gotten Professor Howard of UVA to write a long legal memo supporting the right of Beyer to act as Bolling now intends.

The Bolling Power Play is intended to play out this way. When the new Senate meets next January, the old Senate rules no longer apply, the body operates under standard parliamentary rules, meaning the presiding officer – the LG – gets to break any tie including on motions involving the organization of the body. In terms of practical, raw, political power, this means the 20 GOP Senators, as a block, will vote to give themselves all the power they legally can take and want, knowing such a move will at worst produce a 20-20 tie vote, leaving the matter to the tender mercies of the LG’s decision.

Presto! Suddenly, Bill Bolling, a man only moments ago with a small gavel like every previous LG, will suddenly wield the Hammer of Thor. As long as the 20 Republican Senators stick together, Bill Bolling gets to decide on the fate of legislation Democrats believe will turn Virginia from mainstream to extreme.

As a matter of legislative process, the House of Delegates, along with the Governor, would need to likewise approve such measures for them to become law. But the working assumption in Virginia politics is that whatever clears of the Senate of such things will pass muster in the House and receive the Governor’s John Hancock, with perhaps minor changes.

The last time Virginia had such one-party Republican rule of Capitol Square it provided the fireworks that led to Mark Warner and Tim Kaine’s election, with Democratic AG candidate Creigh Deeds losing by the closest margin in any previous statewide contest.

Thus if the same type of result happens in 2013, it will not technically redefine Virginia politics.

But as for the two men who might trigger the result – Bill and Kenny – their rivalry has led them to redefine their offices in some measure due to a desire to show the GOP faithful who is the true conservative change maker, willing to break the old rules to establish the new Kingdom.

Governor McD has used the old traditions to try to become a new national conservative who can be trusted with the VEEP’s job. But his two running buddies have chosen, as Robert Frost might have said, the Road Not Taken.

As the New Englander predicted, choosing it will make the all difference in 2013.

If they do, then get ready for the 2013 backlash. Truth is, the first casualty of which could be Governor McDonnell, whose national rep is based on a different approach. 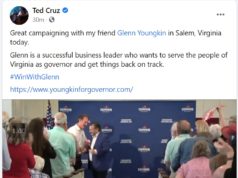