It's safe to say that if we end up with a sharp reduction in any sort of Federal spending due to the automatic triggers built into the deficit reduction plan, the DC area will certainly feel a more acute pain than many other regions. I almost hesitate to mention this, because, let's not forget, this isn't Detroit here. This is the wealthiest metro area in America. Loudoun, Fairfax, Montgomery, and Arlington Counties have average household incomes far above the average for most counties. But let's not pretend these people are government workers. Take a drive around the beltway, especially on the Virginia side. The defense contracting buildings are impressive and dominate the skyline. You'd be led to think that these folks at these contracting firms are doing pretty well, and you'd be right.

A recent report submitted to the House Oversight and Government Reform Committee by its Democratic members (including local representatives Elijah Cummings of Maryland, Eleanore Holmes Norton of DC, and Gerry Connolly of Virginia), laid bare the taxpayer rip offs that are many of these contracting firms. According to the study, “currently, government contractors can charge taxpayers $693,951 a year for each of their five highest paid executives, while there is no cap for other contractor employees.”

The American Federation of Government Employees (AFGE), the largest union representing Federal workers, has proposed capping the compensation government contractors can charge taxpayers at $200,000 annually per employee, which is the salary Cabinet secretaries earn. This idea is supported by the Democrats on the committee.

The Democrat's report, authored by Cummings and endorsed by AFGE, reiterates the folly of leaning hard on Federal employees in reducing the deficit as well. Both groups state what we should already know as a likely outcome of wrongheaded austerity: that further cuts to federal employee compensation, benefits or workforce size will negatively impact recruitment and retention and substantially degrade agency performance.

As progressives, we need to continue to speak out against this ridiculous deficit reduction plan as it stands now, and it's safe to say that I'm sure most of us agree with AFGE and the Democrats in this case.

(full disclosure: I am a shop steward for AFGE Local 32) 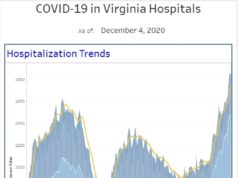 Another local news outlet (in this case, the Arlington Sun Gazette) appears to be on shaky financial ground... https://bluevirginia.us/2020/12/friday-news-274000-dead-and-trump-obsesses-over-election-conspiracy-theories-wheres-the-outrage-biden-harris-normal-interview-with-close-ties-to-multiple-candidates-kaine#comment-5176654349