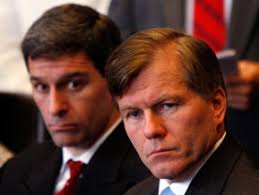 Here’s why genuine conservatives should repudiate the Virginia Republican Party as led by Governor McDonnell and Attorney General Cuccinelli.

True conservatives don’t want government power being used against the free exercise of legal rights. But that’s what these Virginia Republicans have shown they are willing to do.

A congressional panel headed by a Republican found no basis for Cuccinelli’s allegations of fraud against a respected climate scientist, Professor Michael Mann, formerly of the University of Virginia. Yet Attorney General Cuccinelli used subpoena power to harass and intimidate Mann and, by extension, to create obstacles to the free inquiry of other professional scientists.

That is not the American way. True conservatism takes a principled stand against such abuses. It does not applaud them. Whatever one thinks of the concerns being raised by climate scientists, no real conservative should ever countenance the use of state power to intimidate and hobble people whose participation in the marketplace of ideas runs contrary to the interests that certain office holders wish to serve.

Nor should one’s opinion about the right to abortion affect one’s judgment on another abuse of state power.

With Governor McDonnell’s support, the Virginia Board of Health instituted regulations that clearly had no purpose other than to impose such heavy financial burdens on abortion clinics that they would be compelled to close their doors, and thus prevent American citizens from exercising a right that has been upheld by the Supreme Court of the United States.

Just as it is illegitimate, to anyone who believes in democracy, to use a poll tax to prevent certain people from voting, in order to gain more power for one’s own group, so it is illegitimate to hamper the exercise of any other right.

Conservatives should object to such abuse of power in principle, just as when government action tries to erect barriers to the exercise of the Second Amendment right to bear arms.

From these assaults on citizens’ rights, we can see that some Republicans do not respect the rule of law, which is a major conservative value. They are all about power.

I’m running for Congress in Virginia’s 6th District to replace Bob Goodlatte, a 20-year incumbent who has voiced no objections to the national Republicans’ putting their partisan advantage over serving the national good.

But the immediate electoral challenge is to see to it that the Republicans at the state level-who show so little restraint in how they wield their power-cannot remove all barriers to the imposition of their will on our state.

That’s what’s at stake in next Tuesday’s elections, with control of the Virginia state Senate up for grabs.  Looking at the record of these McDonnell/Cuccinelli Republicans, true conservatives should help make sure the state Senate remains a check and a balance on this pseudo-conservative Republican group.

To learn more about Andy, please go to