Holidays offer us a chance to put our usual pursuits aside. But often, also, holidays provide a light to illuminate the meaning of our usual pursuits. So it is with this Christmas season and with our efforts to meet the challenge of the present crisis in America.

Over the generations, the holiday of Christmas has become deeply woven into American culture, expressing both the nature of our country and its ideals. Aside from the commercialization of the holiday, which of course reflects an important part of what America is about, there are also the deep moral values that gain expression in America during the Christmas season.

As a way into the moral meanings of Christmas in the context specifically of American culture, I’d like to look at four of the most prominent imaginative works that, over the years, Americans have found meaningful to include in their holiday celebrations.

1) A Christmas Carol, by Charles Dickens, and the various movie versions of Scrooge;

2) Amahl and the Night Visitors, an opera by Menotti, broadcast every Christmas season, for many years, on NBC;

These works move us because of what they say about the way the world should work according to a moral vision of what life is about. They connect with Christmas, and they connect with the moral heart of America. And the issues they raise are central to the crisis that we Americans now face in the political realm, and that are at the heart of this campaign.

In the short essays to follow, I will briefly discuss each of these, and how they illuminate the challenge that faces us and how they should fortify us in our hope and resolve. 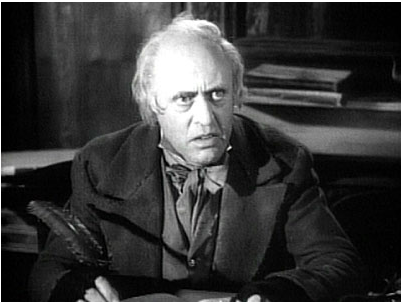 MONEY OR PEOPLE? THE ISSUE IN “A CHRISTMAS CAROL”

What is Dickens’ famous “A Christmas Carol” about? It’s about a man who has seriously misconstrued the question, “What is life about?”

To begin with, he is blind and unfeeling when it comes to interconnection: “”It’s not my business,” Scrooge returned. “It’s enough for a man to understand his own business, and not to interfere with other people’s. Mine occupies me constantly.”‘

Where have we Americans lately heard this point of view? The whole assault on government is a campaign launched by Scrooges of such a point of view. Let people attend to their own business, as disconnected social atoms in the market, they say, without having to concern themselves with the well-being of their fellows. “Every man for himself,” not “We’re all in this together.”

“His own business,” to Scrooge, was all about making money. He becomes rich, but pinched in spirit, small of heart.

Through the intercession of the ghosts of Christmases past, present, and future, he is changed. By the end, he has grasped that life is about our interconnectedness with other people. So many opportunities missed, but it is not too late to learn to open his heart.

What has this to do with Christmas? It is of course more than that those ghosts were connected with the holiday. It also connects with what the holiday is about. It celebrates the birth of one who said, “You cannot serve both God and Mammon.” (Matthew 6:24) And who said also, “A new commandment I give unto you, That ye love one another.” (John, 13:34)

The question that faced Scrooge is at the heart also of the present American crisis. Is the power wielded in the political realm to be about Money, or about People?

In my campaign, we’ve taken on the challenge to show how People Power can defeat Money Power. We are seeking to re-establish the kind of politics in which our interconnectedness is honored and cared for, not just every individual seeking to get what he can for himself. We want power in America not to grow out of the war of all against all, but in the service of love and compassion.

NEXT INSTALLMENT: “AMAHL AND THE NIGHT VISTORS” & “IT’S A WONDERFUL LIFE” (to be posted on Tuesday)