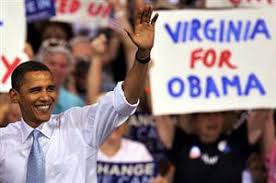 It’s been a rough three years for Virginia Democrats since the glory days of 2005-2008, and 2013 could be tough, but polls like this one should put a smile on our faces for 2012 at least!

*Obama’s approval rating in Virginia is in positive territory, at 48%-47%.

*Obama beats Romney among all age groups in Virginia except for one — those older than 65. Among 18-29 year olds, Obama’s crushing Romney by 22 points, and among 30-45 year olds, Obama’s ahead by 14 points. It’s almost the exact same story with Gingrich as well.

*Bottom line, according to PPP: “”It continues to look like Virginia may be Obama’s firewall state,” said Dean Debnam, President of Public Policy Polling. “He’s holding up well there and it’s going to be tough for the Republicans to get to 270 electoral votes without it in their column.”

So, let’s win Virginia for Obama once again, all but guaranteeing him reelection as president (and almost certainly guaranteeing Kaine over Allen as well) in November 2012!