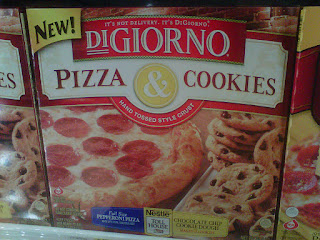 This week, we learned famed culinary fat food-pusher Paula Deen has diabetes, but only revealed it 3 years late to protect her cooking empire and is now hawking diabetes drugs winking that  – for a price – maybe you don’t have to do all those hard diet & exercise changes.

And then former oil company consultant Newt Gingrich blasted President Obama for rejecting Congress’ efforts to force him to approve the Keystone XL tar sands pipeline before TransCanada has even determined a safe route, even though it would kill jobs and raise gas prices.

Last night I was in Harris Teeter and spotted this combo package of DiGiorno Pepperoni Pizza/Nestle Toll House Chocolate Chip Cookies and wondered … isn’t gluttony #2 on the list of deadly sins? And doesn’t America claim to be three-quarters Christian? Talk about cafeteria Christianity.

But come on – there’s no money to be made in hard choices. How could Paula Deen keep making money by the pudgy fistful by telling people to stop shoving cheese, salted meat, chocolate & dough into their gaping maws & go for a walk? How could Newt Gingrich keep the oil money flowing by telling people the only real way to save on gas is to drive less or pay more for an efficient vehicle?

Much easier to tell people to have a second helping of pizza & cookies and take their magic snake oil pill, and tell people it’s not our conspicuous consumption but the gays that are the cause of our moral decay.