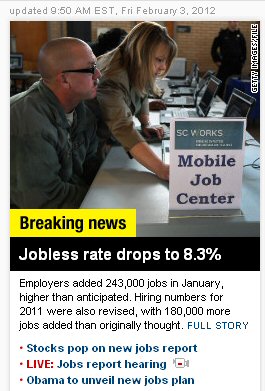 There’s no other way to put this, but to say that this morning’s jobs numbers were superb. Here’s Ezra Klein’s take:

The strangest thing about January’s jobs report is that it’s pretty much all good. The headline numbers are great, of course: payrolls are up by 243,000 jobs. Unemployment is down to 8.3 percent. But the inside numbers are good, too.

The bottom line is that this isn’t just a good jobs report. It’s a recovery jobs report. It’s showing the sort of numbers that win elections. As my colleague Neil Irwin tweeted, “That sound you hear is champagne corks in the West Wing.”

Also see Nate Silver’s analysis, that President Obama’s “magic number” for reelection is 150,000 jobs per month. Even Republicans might be able to do the math on this one: 243,000 new jobs in January 2012 is higher than President Obama’s “magic number” of 150,000 new jobs per month. Enjoy the champagne, West Wing, you’ve earned it! 🙂

P.S. Also, we need to keep in mind a couple important things. First, that this recession was inherited by Barack Obama from the Bush Administration when he took office in late January 2009. Since then, as I wrote a couple weeks ago, we are better off on almost every metric. After today’s superb jobs report, that’s even more the case. Second, that the recovery would be even stronger if it weren’t for Republicans preventing a larger economic recovery package in the first place, as well as more aid to states and localities, the wildly irresponsible brinksmanship on the debt ceiling, etc. If it weren’t for all that baloney, the economy would be cranking along even better than it already is, thanks to President Obama and the Democrats – but ZERO thanks to Republican’ts.