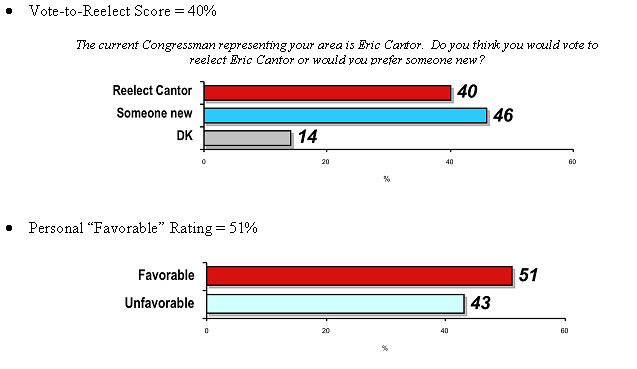 Yeah, I’m highly skeptical about any poll that shows Eric Can’tor as truly vulnerable this year – or any year, for that matter, in a district that’s strongly “red” leaning and with the huge financial and other (e.g., he’s go the Republican Times-Disgrace in his back pocket) advantages Can’tor holds. Still, I found this poll conducted in November (but still relevant, I’d think) by Keith Frederick – who has polled for Mark Warner, Steve Shannon, and many other Democratic and Independent candidates for more than 30 years – to be intriguing. If nothing else, it indicates that Eric Can’tor is not particularly popular in his district, as “red” as it is. A few highlights from the polling memo.

*Cantor’s “40% ‘reelect’ score shows a base vote well below 50%. Just 34% of Independents support his reelection.”

*”His 51% ‘favorable’ is extremely weak.  It shows absolutely no cushion of likeability to draw undecided or swing vote to his side.  With nearly total name recognition, the polarizing Eric Cantor has no room to expand support.”

*”Other tests in the poll clearly show that Congressman Cantor’s deep ties to Wall Street, his defense of Wall Street hedge fund managers’ tax breaks, lack of constituent service, and public support of key pieces of the Republican House agenda are big problems with solid majority of CD7 voters. In fact, after exposure to Cantor’s public record, his vote support drops well below 50%.”

So, now it’s up to Democrats to find out whether this poll was an outlier, or whether it’s on to something real. The three Democratic candidates right now are Wayne Powell, David Hunsicker, and Jim Phillips (for whom this poll was conducted). May the best man win, and then, hopefully, proceed to give Eric Can’tor a run for his (ill-begotten) money!