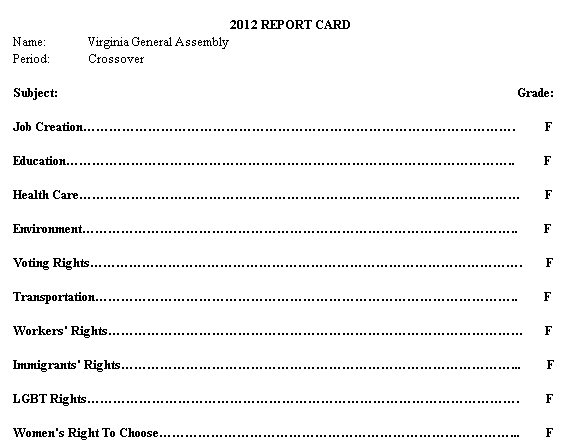 A press release from the Virginia Progressive Caucus is after the “flip.” In sum, heckuva job Virginia Republicans, you’ve managed to declare war on women, voting rights, education, LGBT citizens, workers, immigrants, and the future of Virginia as an attractive place for people and business to live and work — all in 1/2 of one General Assembly session. Now THAT takes some serious doing! Heh.

General Assembly Has Failed On The Issues Affecting Virginians

Richmond – Today, following “Crossover” at the Virginia General Assembly, members of the Progressive Caucus released a “2012 Report Card” showing that the legislature has earned failing grades on all of the subjects that affect the lives of Virginians.

The General Assembly’s leaders have made this a divisive session: from their refusal to produce meaningful jobs legislation, to their decision to ignore common-sense measures to protect our natural resources, to their long list of destructive bills designed to take away Virginians’ rights. They have missed the opportunity to make progress on the important issues affecting the daily lives of Virginians.

Delegate Patrick Hope (D-Arlington), co-Chairman of the Progressive Caucus, said, “Conservatives campaigned on a pledge to address real issues to help Virginia families, but instead their radical right-wing agenda has been the focus and has only made problems worse. We believe it’s time to put partisanship and ideology aside to work toward real solutions that grow our economy, repair Virginia’s crumbling infrastructure, and invest in a world-class education for our children so they can compete in a global economy.”

Senator Adam Ebbin (D-Alexandria), co-Chairman of the Progressive Caucus, said, “It’s time to invest in a Virginia that works for everyone. We should be supporting working middle-class Virginians, not taking away their rights. Virginians across the Commonwealth are concerned about creating jobs and getting our economy on track. It’s time for Virginia’s leaders to put Virginia families first. We need to move the state forward, not drag it backward.”