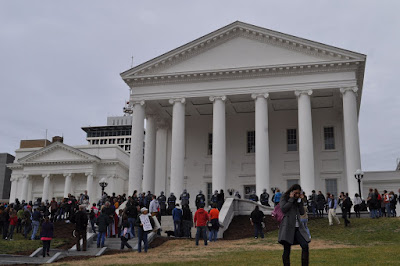 Picture the scene, a cold January day in Richmond, Virginia and a group of about 120 people are gathered for a solemn vigil on the grounds of the Capitol building, to commemorate the lives of the more than 800 Virginians killed by gunfire in the previous year.  The group listens in complete silence as one of the speakers, a mother whose child was shot dead in his own bed by a stray bullet passing through the wall of his home, hold up his photograph.

As she speaks, a large group of armed men surround the crowd, their coats removed even on this cold day, to reveal the handguns they carry on their belts or the assault rifles slung over their shoulders.  Some of them push so far forward that those on the fringes of the crowd can feel the weapons pushed up against their backs.  As the woman describes her harrowing loss in a faltering voice, one of the intruders yells out “Guns Save Lives” and the others laugh cruelly.

Meanwhile, a small number of armed Capitol Police stand idly by, yet, despite direct pleas to move the gun wielders back from our lawfully permitted event, they simply reply that “These folks have a basic 1st. amendment right to gather and speak”.

Now fast forward a few years to the same place, but with a different, larger, crowd.

Imagine this time a group, mostly of women, a few pregnant, some with children in strollers or hand in hand. Older women, some with husbands and groups of college age women, all standing on the grounds of the same Virginia Capitol, but there this time because of the recent barrage of legislative attacks on women’s health and a woman’s right to choose.  Nobody armed, nobody behaving badly, just a large, well-behaved crowd, fired up by righteous indignation over the actions of some of their elected officials.

The big difference this time is that the armed Capitol police are now more numerous and they are backed up by riot police and a fully armored SWAT team – “to ensure that the protest is conducted safely,” they say. Admittedly, the crowd is now standing near the front steps of the magnificent Capitol building, that signifies the location of the oldest democratic institution in the country, in the state that gave us so many of the Founding Fathers and early Presidents. The place built by Thomas Jefferson, the man without whom it was said “there would have been no Virginia Statute on Religious Freedom, and no basis for the most precious clause of our most prized element of our imperishable Bill of Rights – the First Amendment to the United States Constitution.”

A clause which clearly states “Congress shall make no law ……abridging the freedom of speech, or of the press; or the right of the people peaceably to assemble, and to petition the Government for a redress of grievances.” Yet, this peaceable assembly of people, gathered to petition the State Government for a redress of grievances, has discovered something quite unexpected, they have found themselves in a “Constitution Free Zone,” a place where the 1st Amendment clearly does not apply, a place where armed riot police, standing just feet away from Jefferson’s shrine to democracy and freedom, are ready to arrest people for “unlawful assembly.”

So what is it that makes these two events so different? What is it that causes such alarm for the authorities? How can armed men intimidate gun violence victims with impunity and yet unarmed women cannot gather peacefully to preserve their dignity? Those questions are what we all need to ponder and when we come up with answers we should remember them in November, when we all have the right to assemble at our polling stations and exercise our most precious right – the right to vote these hypocrites out of office!