Neighborhood opposition has killed a plan to build 260 apartments in Chesapeake and instead only 30 to 40 single-family homes will be built:

“I couldn’t blame anybody who would want to,” he said. “But it also comes down to renters. I don’t know if this sounds terrible: Renters aren’t really going to be invested in the community.”

A similar saga played out last month in Western Branch, but on a larger scale, when City Council killed the massive Breckinridge development. Walker said he’s expecting a call from John Arthur, who spearheaded the fight against Breckinridge, but he also has picked up pointers about the Western Branch efforts from reading newspaper accounts.

That Breckinridge development would’ve brought 1,500 new living spaces and millions more in economic development to an area in decline, but Chesapeake blocked it anyway, again citing concerns about new students. As Matt Yglesias points out, “‘the schools here are good and people will want to send their children to them’ operating as a reason to not let people move to a neighborhood has a particularly toxic impact on educational equity and effectiveness.”

You often hear people say that Americans must want sprawling suburban lifestyles, because otherwise more people would live in dense developments and any attempt to say otherwise is a secret UN socialist plot. But here we have two very real examples of existing single-family homeowners preventing new apartments from being built, forcing hundreds of people to live further out. 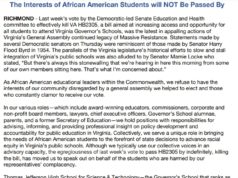 The Interests of African American Students Will NOT Be Passed By