Clearly, we have a long way to go to dig ourselves out of the economic mess we inherited from the Bush Administration, but with this morning’s employment news, there’s no doubt that the economy is recovering. 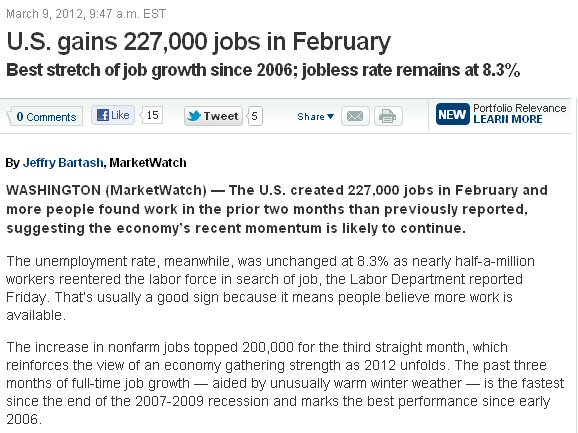 A statement by the Chairman of the Council of Economic Advisers, Alan B. Kreuger, is on the “flip.” The bottom line: “Today’s employment report provides further evidence that the economy is continuing to heal from the worst economic downturn since the Great Depression.” A few details: “Despite adverse shocks that have created headwinds for economic growth, the economy has added private sector jobs for 24 straight months, for a total of more than 3.9 million payroll jobs over that period.”

So, great news, right? Well, yes, absolutely; that is, if you’re a normal, sane American who wants the economy to recover, people to get jobs, stuff like that. But if you’re a Republican? Based on statements like this one (“Today’s jobs report is yet another reminder that far too many Americans are out of work, and the situation is clearly not improving.”), from RNC Chair Reince Priebus, they desperately want the economy to fail.

Why would that be? Clearly, there’s one overriding reason: Republicans know that an improving economy means a high likelihood that Barack Obama will be reelected in November (see Ezra Klein for more on that subject), and that’s something they can’t stomach.  Country before party? Americans’ jobs before the jobs of Republican politicians? When it comes to the Republican’t Party, apparently the motto is “the virtue of selfishness, regardless of the consequences.”

Statement on the Employment Situation in February

WASHINGTON, DC – Alan B. Krueger, Chairman of the Council of Economic Advisers, issued the following statement today on the employment situation in February. You can view the statement HERE.

The Employment Situation in February

Today’s employment report provides further evidence that the economy is continuing to heal from the worst economic downturn since the Great Depression. It is critical that we continue the economic policies that are helping us dig our way out of the deep hole that was caused by the recession that began at the end of 2007, including measures to help the sectors that were most severely harmed by the bubble economy that misdirected investment and created too few durable jobs.

The monthly employment and unemployment numbers can be volatile, and employment estimates can be subject to substantial revision. Therefore, as the Administration always stresses, it is important not to read too much into any one monthly report; nevertheless, the trend in job market indicators over recent months is an encouraging sign.

Gov. Northam says the replacement for vacancy on the State Corporation Commission (SCC) will be Angela Navarro, to be appointed in early January. https://bluevirginia.us/2020/12/video-highlights-gov-ralph-northam-covid-19-briefing-at-2pm