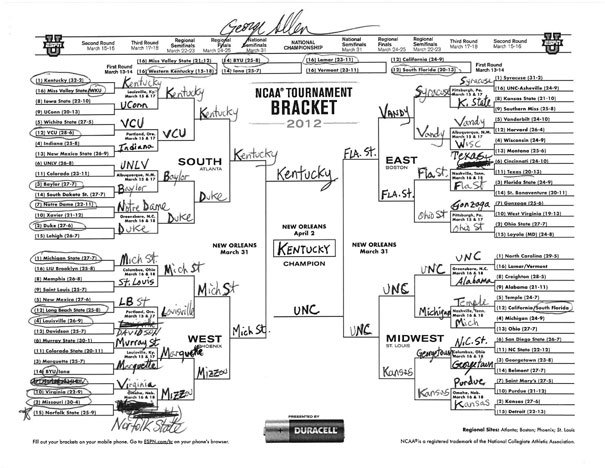 Yet another George Allen  #FAIL.

What’s a Virginia pol to do when forced to pick between Virginia and Norfolk State? — M-I-Z!

It appears that Allen’s first instinct was to predict losses for Norfolk State and Davidson — but then got politically smart and went local and regional.  He just failed to follow through with the changes in ensuing rounds.

Bigger question: Why not just start a fresh new bracket without the second-guesses, especially if you’re going to plaster it on the campaign website?

Uh, maybe because you have the IQ of a chunk of granite? Of course, this is also the guy who’s been paid big bucks by the fossil fuel industry to promote their products, yet obviously knows absolutely nothing about the subject (or possibly does know something, but just lies through his “soft teeth” and out his “whiny throat”).

Video: @FairfaxDems Chair @BryanGrahamVA Gives the Best 1-Minute Explanation To Date For Why to Vote NO On Redistricting Amendment ("It doesn't actually change anything, the legislators are still in control of the process") https://bluevirginia.us/2020/09/video-fairfax-dems-chair-gives-the-best-1-minute-explanation-to-date-for-why-to-vote-no-on-redistricting-amendment