Thanks to my friend JR Tolbert for the images from Richmond, the first of which he annotated, “#waronwomen rally in Richmond for women’s health,” and the second “SWAT team dispersed the peaceful crowd.” Also, the Richmond Times-Dispatch reports, “Thirty women’s-rights demonstrators were arrested this afternoon in a protest at the state Capitol that drew hundreds of protesters and Virginia State Police in riot gear.” Why? “Capt. Raymond Goodloe of the Virginia Division of Capitol Police…said those arrested were likely accused of either trespassing or unalawful assembly.” Uh huh.

UPDATE: JC Wilmore of The Richmonder just posted video. I’m bumping that to the top, photos now after the “fold.” JC writes, “A group of peaceful protesters opposed to the Republican Party’s War on Women are surrounded by riot police and dragged away under the guns of a SWAT team.”

UPDATE #2: The Washington Post reports: “The group had a permit to rally at the Bell Tower on Capitol Square earlier in the day, but Goodloe said rallies are not allowed on the Capitol steps. The group had planned to march to the Executive Mansion where Gov. Bob McDonnell lives after the rally.”

UPDATE #5: Richmond’s Style Weekly (“Richmond’s alternative for news, arts, culture and opinion”) has more, including “Some of the State Police officers wore green camouflage and carried rifles and canisters of tear gas (no tear gas was used, however).” 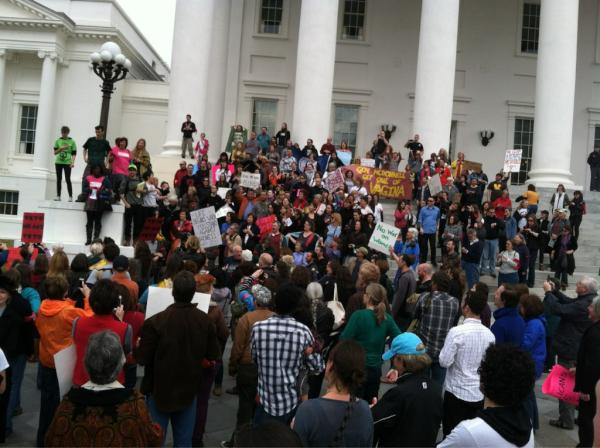 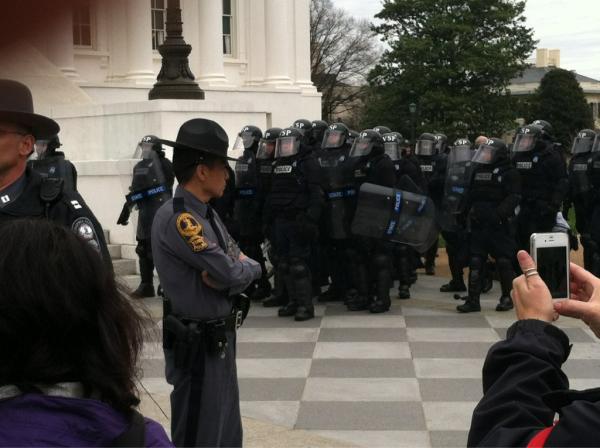 Virginia #3... not too shabby! Also interesting, note how most of the bottom-ranked states are "red" and most of the top-ranked states are "blue?" Funny how that works. ;) https://bluevirginia.us/2021/04/tuesday-news-we-are-living-in-a-climate-emergency-and-were-going-to-say-so-doctor-says-george-floyd-had-exceptionally-strong-heart-daunte-wrights-deat#comment-5341479900