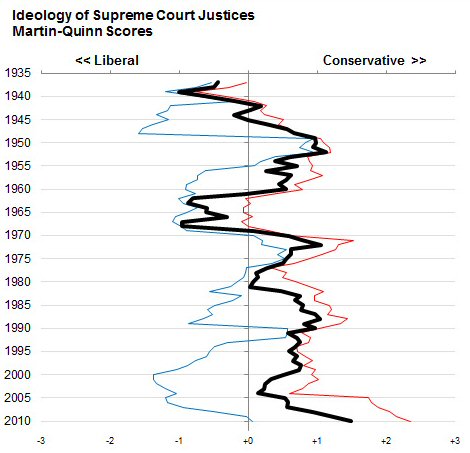 The always superb FiveThirtyEight by Nate Silver has an eye-opening analysis of the Supreme Court’s ideological lurch to the right, making it “the most conservative since at least the 1930s.” Note the spike in the red line towards the far-right portion of the chart since 2005? You think that this trend might, just might, have something to do with the fact that President George W. Bush put John Roberts (2005) and Samuel Alito (2006) on the Court, with the super-conservative Alito replacing the moderate Sandra Day O’Connor? Gee, ya think?

Also remember, even before Roberts and Alito joined the Court, it was already solidly conservative (aka, “right wing,” as these people are NOT traditional conservatives in almost any sense; more like Republican political hacks), as you can see from Nate Silver’s chart, and also considering egregiously right-wing partisan rulings like Bush v. Gore. Since 2005, it’s only gotten worse (note: imagine how much better off we’d be if Al Gore had become president in 2001, not George W. Bush?!?), with the horrendous, Democracy-destroying Citizens United ruling, and of course the Heller decision on the 2nd Amendment, which Justice John Paul Stevens correctly said overturned longstanding precedent and “bestowed a dramatic upheaval in the law.”

This past week, we saw the Tea Party Supreme Court apparently “ready to engage in some despicable judicial activism on ObamaCare,” with far-reaching implications for the country – and the Court itself – if it engages in such an extreme degree of right-wing judicial overreach (in this case, ironically, they’d be overturning a core conservative idea, the “individual mandate,” which “is considered to have originated in 1989 at the conservative Heritage Foundation,” and which was included in Republican health care bills in 1993, 2007, and of course in “Romneycare”). It’s beyond “ridiculous” into “utter travesty” territory.

Anyway, if you think it’s bad now, imagine replacing Bill Clinton appointees Ruth Bader Ginsburg (79 years old) and/or Stephen Breyer (73 years old) with whatever Scalia/Alito/Thomas clones a President Willard “Mitt” Romney might nominate? That would quickly make the court 6-3, even 7-2, against everything Democrats and progressives care about — the environment, civil liberties, civil rights, women’s rights, workers’ rights, the power of corporations, freedom of/from religion, etc, etc. And imagine that going on for possibly decades. Our country would be unrecognizable, and not in a good way, that’s for sure. Maybe more like this or maybe one of these.

The truly scary thing is, we don’t need to refer to science fiction dystopias to imagine what life in America would be like under a court with people like this in the majority for decades.

Let’s just make sure this never happens. You can start right now by: a) volunteering for Barack Obama’s reelection; b) donating to Barack Obama’s reelection; c) doing the same for Tim Kaine; d) supporting Democrats and progressives at every level – local, state, Congress, you name it; and e) joining with other progressives to form a powerful movement that the right-wing radicals can’t stop, then pushing to move this country in strongly progressive direction (e.g., universal health care, a clean energy economy, equal rights for all, an open and honest government).

Come to think of it, you know how Republicans like to talk about how this is the most important election in our lifetimes? Well, they may very well be right, but (of course) not for the right reasons (as usual, they get everything 180-degrees backwards/wrong). The fact is, when it comes to possibility of the Supreme Court tipping even further to the far-right than it already is, that’s a real possibility if Barack Obama is defeated and if the U.S. Senate flips to Republican control. This November, let’s make damn well sure that doesn’t happen!