Yes, I understand BlueVirginia is supposed to be a deadly serious place where we discuss only the weightiest of issues.  But I can’t resist.

Tareq Salahi, 42, of Front Royal is seeking the state’s top job. He has filed for candidacy as a Republican in next year’s gubernatorial contest, according to the site, which published a declaration of candidacy form filled out by Salahi and notarized.

Looks as though Kookynelly has some equally kooky competition!! 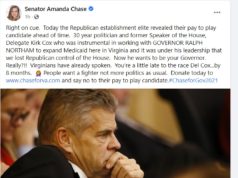