The following press release (see the “flip” of this diary) is from the Adam Cook for Congress campaign in Virginia’s 1st CD. Note that Cook, second from the right in the photo (click to “embiggen”), “served as the Officer in Charge of Investigations and Chief Legal Advisor at the Detention Facility in Parwan, the central detention facility for insurgent fighters captured in Afghanistan.” In other words, Democratic nominee Adam Cook knows exactly what he’s talking about here, while Rob Wittman…well,  put it this way, who would you believe, someone who was on the ground serving his country in war, or a posturing politician like Rob Wittman, who also pretends to be a “moderate” when he votes around 94% of the time with the radical right wingnuts in the House of Representatives? Yeah, tough choice I know. 🙂 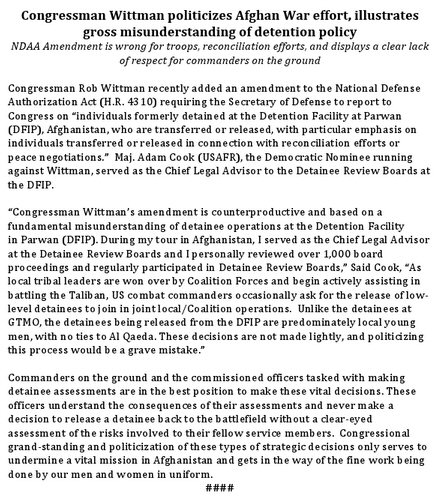 WHAT THEY ARE SAYING: After First Presidential Debate, Virginians Agree Biden is Best Choice for President