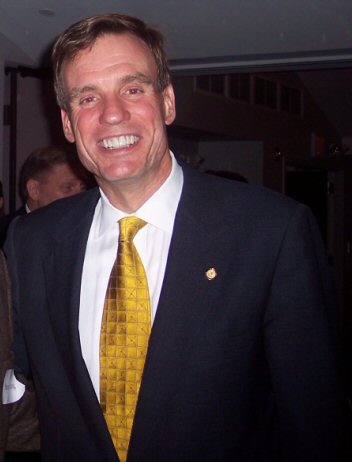 The latest Washington Post poll indicates Senator Mark Warner would be the prohibitive favorite in the 2013 Governor’s race. Commentators, legal scholars, and political activists have thus been debating the pros and cons of whether Mr. Warner would give up his Senate seat to run for Governor again.

But I ask: Why can’t he serve in both offices at the same time?

My legal scholar friends say this is not permitted, pointing to the fact it has never happened in Virginia or anywhere else in the country. They are sure it violates any number of laws and Constitution provisions.

But is that so?

This question brings to mind one of the great political stories involving legendary Louisiana Governor Huey Long, the infamous “Kingfish” who Franklin Delano Roosevelt Jr. considered the most dangerous man in American politics. In 1930, Governor Long found his government spending programs and anti-Big Oil populist politics stalled by enemies in the state legislature. He used this as an excuse to challenge the renomination of the incumbent United States Senator in the Democratic Senate primary. He won easily. But Long refused to resign, not wanting to let the Lt. Governor, a bigger enemy, become Governor. This resulted in the Senate seat being vacant for about a year. When questioned about allowing the state to be denied its rightful representation in the Senate, Governor Long said the vacancy didn’t mean anything, because when the incumbent had been there, “the seat had been vacant anyway.”

Which raises the question: Did Long become Senator as soon as his term started even though he technically never stood on the Senate floor and followed the body’s rules for taking his seat? Since Huey never actually tried to vote, it is at best an academic inquiry at this juncture. Moreover, as we will see below, Long’s legal status in terms of being a Governor/Senator at the same time is not relevant anyway in terms of Virginian Mark Warner.

So I ask:  Could Senator Mark Warner run in 2013, get elected Governor, and still keep his seat in the worlds’ most exclusive debating society?

But my conclusion as someone who writes on the Supreme Court:

YES he could. There is nothing in U.S. or Virginia Constitution, federal or state law, Senate rules, or even possible changes in any of these areas which would now, or in the future, prevent Warner from serving as Governor and Senator at the same time. But he will only be able to accept his gubernatorial salary.

Article 1, Section 3 of the U.S. Constitution creates the Senate, giving each state 2 members. The document originally gave state legislatures the power to determine how their Senators would be selected. But in 1913, a sufficient number of states ratified the 17th Amendment, giving the people the right to elect their Senators. The only Constitutional requirement for getting elected Senator is likewise found in Section 3, declaring no “person shall be a Senator who shall not have attained to the Age of thirty years, and been nine years a Citizen of the United States, and who shall not, when elected be an Inhabitant of that State for which he shall be chosen.”

Article 1, Section 5, says that each branch of the Congress “shall be the Judge of Elections, Returns and Qualifications of its own Members.” Does this mean the Senate could decide that once elected Governor, Warner now longer meets the Qualifications for a Senator?

ANALYSIS: The Constitution is superior to any rule of the Senate. Thus, the Senate cannot, by passing a rule of the body, add another requirement. Their power under Article 1, Section 5 is limited to determining whether the person presenting him/herself to the body meets the Constitutional requirements, or whether their election back home was tainted in some way so as to allow the Senate to negate the voting results.

The Senate has, in the past, negated the results of what it considered to be a tainted election. In 1948, Senator-elect Lyndon Johnson had his narrow victory challenged on the grounds of the results being tainted by voter fraud. He beat back the challenge before a Senate committee in part due to the legal skill of his lawyer, Abe Fortas. [When LBJ became President years later, he appointed Mr. Fortas to the Supreme Court and later tried unsuccessfully to make Mr. Fortas the Chief Justice.]

Article 1, Section 6 does address what other employment a Senator may have during the six years for which he or she had been elected. “No Senator…shall, during the Time for which he was elected, be appointed to any civil Office under the Authority of the United States, which shall have been created, or the Emoluments whereof shall have been increased during such time: and no Person holding any Office under the United States, shall be a Member of either House during his Continuance in Office.” The Governorship of Virginia does not fit this description.

CONCLUSION: There is nothing in the Federal Constitution prohibiting a being Governor and Senator at the same time. The Senate has no power to alter this situation. In theory, the Federal Constitution could be amended to put in place such a prohibition. But that isn’t going to happen. In theory, I suppose the Senate could pass a rule declaring a Senator to have a conflict of interest if he or she holds any other public office such as Governor. But that isn’t going to happen either.

Article V, Section 3 of the Virginia Constitution covers the qualification of Governor:

Article V, Section 4 says that once “in office he [the Governor] shall receive no other emolument from this or any other government.”

ANALYSIS: There is nothing in the state constitution which prohibits Warner from serving in both jobs at the same time. Article V, Section 4 only limits Warner to collecting his gubernatorial salary.

COULD THE VA CONSTITUTION BE AMENDED TO PROHIBIT SUCH DUAL OFFICE HOLDING?

Of course. But such a provision could not be passed by the voters until November 2014 at the earliest based on the process required by Article 12, Section 1 of the state constitution. Moreover, it would require all 20 Democratic State Senators to back such an amendment, a rather unlikely situation since it would be aimed at Warner.

In fact, the only way it could possibly be enacted would be to provide a provision exempting the current Governor from the prohibition contained in the Amendment as was done as regards Harry Truman, the sitting President, when the U.S. Constitution got amended limiting someone to two elected presidential terms. This Truman clause was actually dedicated by other constitutional provisions.

Mark Warner can run for Governor, get elected, get sworn in, and keep his Senate seat at the same time. He just can’t collect the federal salary.

The latest Washington Post poll says Warner would be the overwhelming favorite to be elected Governor in 2013. But would this change should he decide to keep the Senate seat and hold both jobs at the same time?

No reason to speculate right now. But it would make for a fascinating question the next time the Post, PPP or any organization decides to poll the 2013 Governor’s race.

VPAP Looks at Whether VA House Dems Could Have Kept Their Majority If They’d “invested more in key races.” The Answer: “Resources were not an issue for the seven incumbent Democrats who lost their seats” https://bluevirginia.us/2022/05/vpap-looks-at-whether-va-house-dems-could-have-kept-their-majority-if-theyd-invested-more-in-key-races-the-answer-resources-were-not-an-issue-for-the-seven-incumbent-democrats-who-lost-their