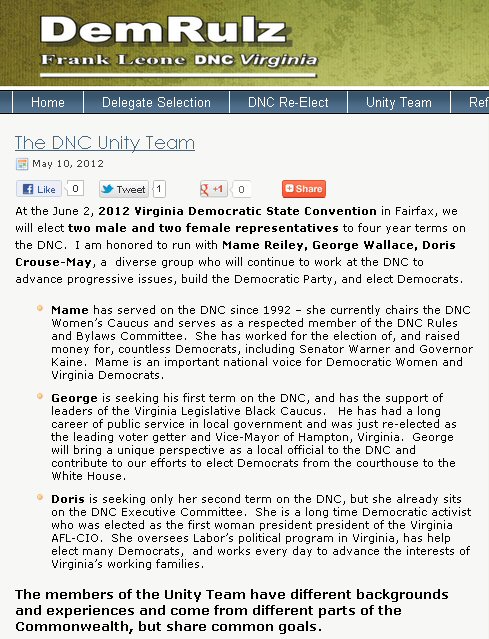 Over at DNC member (and candidate for reelection) Frank Leone’s blog DemRulz, there’s an announcement of a “DNC Unity Team” comprised of Leone, Hampton Vice Mayor George Wallace, Mame Reiley and Doris Crouse-May. As I read the announcement, a couple things jumped out at me.

The first was George Wallace’s claim that he “has the support of leaders of the Virginia Legislative Black Caucus.” At best, that’s very confusing; at worst, it seems to be intentionally misleading. In fact, Del. Lionell Spruill has announced that he’s been endorsed by “11 of 12 members of the VA Legislative House Black Caucus, including Vice Chair Del. Rosalyn Tyler [and] Immediate Past Chair Del. Kenny Alexander.” For his part, George Wallace doesn’t appear to have been endorsed publicly by any African American members of the Virginia House of Delegates, and as far as I can determine, no African American Virginia State Senators have endorsed Wallace publicly as of yet (although my understanding is that Mamie Locke is supporting Wallace). Regardless, Wallace’s claim to have “the support of leaders of the Virginia Legislative Black Caucus” appears to be somewhat of a stretch.

I contacted DNC candidate Ben Tribbett for comment on this. In Ben’s view, what Wallace is doing in implying support by the VA Legislative House Black Caucus’ leadership is “extremely misleading” and “needs to be taken down,” as “voters are being intentionally misled” by this. Ben adds that “this is the type of thing you’d expect from Republicans, not from Democrats.” Finally, Ben pointed out that since this is a “Unity Team,” each member is responsible for seeing to it that misinformation is corrected.

Speaking of the “Unity Team,” that’s the second thing that jumped out at me. My initial reaction was confusion over why people needed to run as a ticket for DNC at all. I asked Ben Tribbett about this, and he said he thought a ticket was unnecessary, as “people are perfectly capable of picking 2 out of 4 [male] candidates for the contested slots” (note: there are 2 female candidates running for 2 positions, so their elections are assured).

Beyond that, Ben believes that the “Unity Ticket” is yet another example of the “problems plaguing DPVA,” in which “there’s a small group of people who feel the need to control every single election,” instead of just letting candidates run and voters make their decisions. For me, it brings back bad memories of how in 2006, the party insiders decided they wanted Harris Miller as our party’s nominee, and how if it weren’t for Jim Webb’s surprise entry into the race, combined with a huge surge of grassroots support for his candidacy, then Harris Miller it would have been. Blech.

Anyway, this should be an interesting election on June 2 in Fairfax. From what I can determine, it’s anyone’s guess at this point which two male candidates will be elected. Stay tuned…