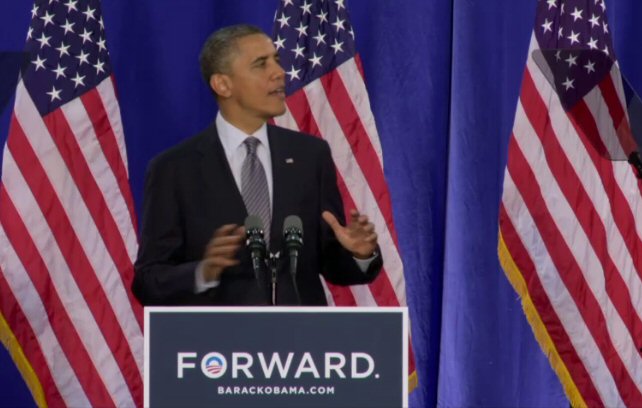 To watch President Obama speaking in Cleveland about his economic vision for our country, click here. The gist of this speech is simple: this election offers a choice between two fundamentally different visions of growing the economy, creating middle-class jobs, and paying down the debt. For Mitt Romney and his allies in Congress, as we know, there’s the usual right-wing ideological belief in slashing regulations on Wall Street and cutting taxes to rich people, that somehow the “free market” will magically solve all our problems. As if that worked so well when George W. Bush, Dick Cheney, Tom DeLay, etc. tried it. Not.

In contrast, Democrats like President Obama believe that economic growth doesn’t “trickle down” from ExxonMobil and Donald Trump, but instead bubbles up from hard-working people in the middle class (and also in poverty). Just as importantly, Democrats believe that the preconditions for sustainable, broad-based economic growth must involve smart, sustained, significant investments in our education, clean energy, and the nation’s infrastructure – not mindless chants of “stop the spending,” as Republicans and Tea Partiers love to mindlessly intone.

And, of course, Democrats believe in a progressive tax code that expects those with the greatest means will contribute their fair share to the common enterprise known as “America.” Republicans, sadly, don’t seem to believe any of those things, let alone that – as Jim Webb likes to say – “the health of a society is measured at its base, not at its apex.” To the contrary, Republicans – the “I’ve got mine so f*** you party” – believe the converse of that statement, that the health of a society is measured at its apex, NOT at its base. And that, frankly, is not just unacceptable but a prescription for national failure. Why would we go down that road, when we have a much more attractive, safe road – the one laid by Democrats – to travel on? Got me.