Remember the May 15 fiasco in the Virginia General Assembly, when a bunch of homophobic bigots rejected the nomination of the eminently qualified Tracy Thorne-Begland to the Richmond District Court, simply because Thorne-Begland’s an openly gay man? Well, now, it appears that sanity and decency have regained the upper hand in Virginia, at least for the time being. Heck, even Governor Bob McDonnell’s spokesman has showed class on this one, commenting that “The governor believes Mr. Thorne-Begland is well-qualified to serve on the bench” and that

[Governor McDonnell] congratulates him on the appointment.” Wow, is hell about to freeze over or what? Here’s the order by Richmond Circuit Court Chief Judge Richard D. Taylor. 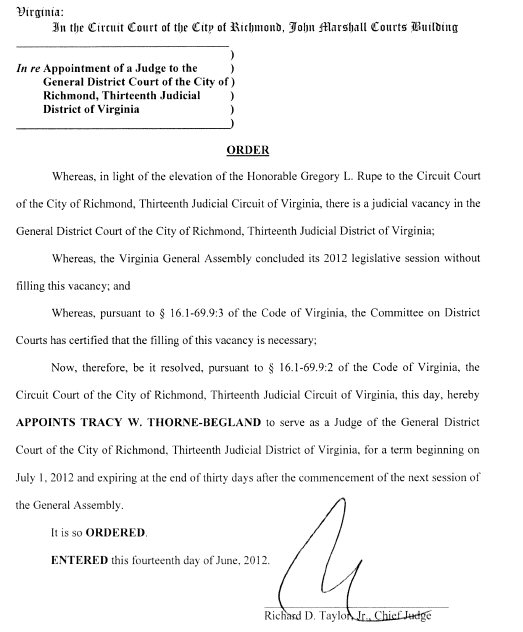 P.S. Also, see the “flip” for Sen. McEachin’s statement regarding the reversal by Del. Richard Morris (R-Isle of Wight) on this matter. Good for Del. Morris, now if he could only convince a few of his Republican colleagues…

Richmond – Senator A. Donald McEachin (D-Henrico) today thanked and applauded Delegate Richard Morris (R- Isle of Wight) for his reversal on Tracy Thorne-Begland’s  qualifications for a judgeship. Senator McEachin said, “I applaud and thank Delegate Morris for his willingness to study an issue carefully and thoroughly, change his mind and then take a stand for those convictions. The leadership Delegate Morris has demonstrated today is, unfortunately, all too rare among politicians. In this action, Delegate Morris has shown himself to be truly serving the public and willing to do what is best, regardless of previous statements or partisanship.

“I would encourage those other legislators who dismissed Mr. Thorne-Begland’s judicial nomination to follow Delegate Morris’ lead and to research the actual record. I am certain they will come to the same thoughtful conclusion he did. I can only hope that, after they do, they also demonstrate his leadership and come forward and speak for Mr. Thorne-Begland. Thank you, Delegate Morris,” Senator McEachin concluded.