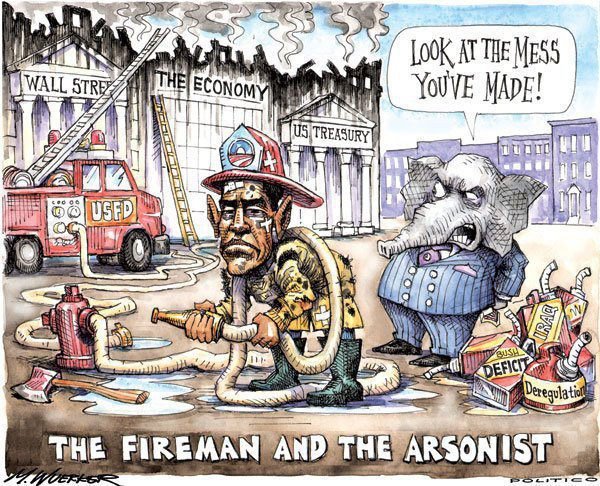 Step 1. Republicans set the fire in the first place — racking up enormous debt on two unpaid-for wars and an unpaid-for Medicare Part D program (not to mention the massive debts accumulated under Saint Ronald Reagan); slashing taxes for rich people, at a cost of $400 billion per year (also unpaid-for); loosening regulations on the banking sector, practicing crony capitalism, contributing to/exacerbating the financial crisis and burst housing bubble; failing to invest in clean energy and getting us off our oil addiction; failing to invest in the country’s infrastructure; etc, etc.

Step 2. Republicans interfere with the firefighters (the Democrats) when they come to put out the fire they, the Republicans, started. Metaphorically speaking, Republicans turn off the fire hydrant, cut the water hoses, put nails in the road to give the fire engine flat tires, advocate letting the buildings all burn down (take the whole city along with it, what the hell), then whine/complain/carp about why the fire wasn’t put out faster and more effectively!

Step 3. Republicans run hundreds of millions of dollars in ads lying to people about what happened, claiming Democrats actually started the fire they set, that Democratic policies – not their own party-over-country, my-way-or-the-highway attitude – actually kept the fire burning longer than it had to, leading to more damage then if we had all just let everything burn down (or something). Maybe they even deny the science and claim that setting a fire and pouring gasoline on it doesn’t cause a fire to burn and grow. They also advocate we set more fires in more buildings, basically repeat the same mistakes on an even wider scale, as their brilliant policy prescription to fix things.

Yes, I know, it’s completely crazy, but it’s an almost perfect, metaphorical description of today’s John Birch Society/Teapublican Party. The only question is, why would anyone with any sense at all vote for these nuts?