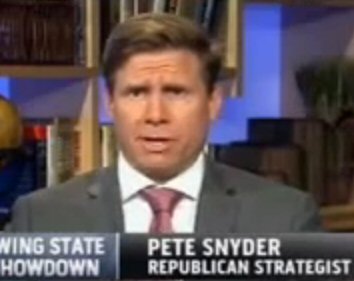 Statement from the Democratic Party of Virginia:

Virginia Victory 2012, the campaign arm for Virginia Republicans, today lit up Twitter with a fresh round of attacks on Tim Kaine.

So what exactly are they talking about?

See the “flip” for the answer, which is that legislation to equalize taxation between online and “brick-and-mortar” operations in Virginia was sponsored by a Republican and signed into law by…yep, Bob McDonnell!

Speaking to the Northern Virginia Technology Council this morning, Tim Kaine expressed his support for the common-sense position that Virginia’s traditional brick-and-mortar retailers should not be placed at a competitive disadvantage to big online retailers.

Virginia Republicans were quick to denounce Kaine, saying that he wanted to “tax the Internet.”

There is strong bipartisan support for this position in Virginia – including from Governor Bob McDonnell!

In March, McDonnell signed legislation that helped level the playing field by requiring online retailers with facilities in Virginia to pay the state’s 5 percent sales tax.

The rationale? To eliminate the competitive disadvantage faced by Virginia’s small retailers.

This legislation was sponsored by REPUBLICAN Senator Frank Wagner.  It passed the House of Delegates by a vote of 95-2 and the Senate by a vote of 37-3. It had the support of online retail giant Amazon as well as the Virginia retailers