(Bottom line: Romney’s not even bothering with the “dog whistle” anymore, he’s just going outright racist at this point — “hey, the black guy doesn’t ‘get’ Anglo-Saxon culture!” Disgusting. Oh, by the way, as someone whose ancestors came from eastern Europe, f*** you Romney. – promoted by lowkell)

Well, here is one of those developments that just leaves you shaking your head in wonder. From today’s Daily Telegraph comes this comment about US-UK relations from an unidentified Romney aide, just as Romney is about to land in England:

We [the U.S. and England] are part of an Anglo-Saxon heritage, and [Romney] feels that the special relationship is special. The White House didn’t fully appreciate the shared history we have.

In classic understatement, the reporter on the story idly observes the comment “may prompt accusations of racial insensitivity.”

It’s impossible to tell whether this is just a simple gaffe by an aide eager to tout his candidate to the English press and people (but who is apparently unaware of the global reach of the Internet), or whether it represents some kind of super-id breakout from the Romney camp resulting from early panic, perhaps based on concern (perhaps poll numbers we have yet to see or interpret correctly, or focus groups) suggesting the narrative of Romney’s problems — tax returns, Bain, secrecy, incompetence — is beginning to take hold over the electorate.

The campaign’s reaction could prove instructive. If the Romney camp attempts to defend the aide and statement, keeping it in the news, it would suggest the campaign wants the race/he’s not one of us issue more explicit (albeit not too official) for whatever reason it has.

On the other hand, if the Romney staff reaches into their desks for the Etch-a-Sketches that must surely constitute standard campaign equipment issue for them by now, it will suggest that, at least for the time being, there does remain a shred of decency with the Romney crowd.

I honestly am not sure how this one will go, but I suspect the Romney camp will want to tamp this one down. For now. Before this one is over, I am fairly certain Romney and his crew will leave no muck unexplored. 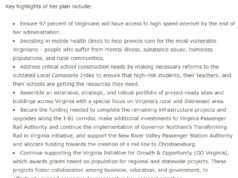 Video: Governor Northam Announces Agreement with Norfolk Southern Railway to Expand Passenger Rail to Southwest Virginia ("Service will return to the New River Valley for the first time since 1979") https://bluevirginia.us/2021/05/video-governor-northam-announces-agreement-with-norfolk-southern-railway-to-expand-passenger-rail-to-southwest-virginia