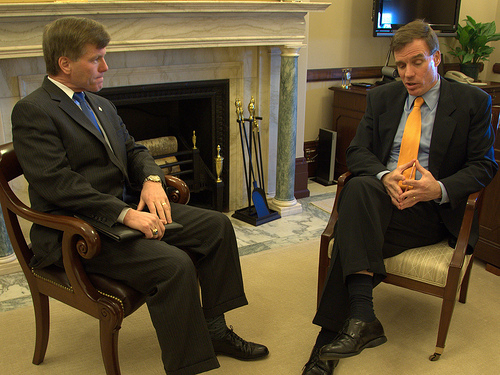 I got an e-mail this morning from a progressive group that in reference to the Senate passage of President Obama’s tax package started out with: “Holy cow, the Senate actually PASSED something!” then urged me to thank Senator Warner for his vote.

Senator Warner voted against not only the President but against children when he sided with the outspoken Oklahoma climate change denier, Senator Inhofe and the coal industry to strip the EPA’s authority to regulate mercury pollution from coal fired power plants.

Then the day after House Republicans voted to expand oil drilling off our Atlantic coast over the objections of the Obama Administration, Mark Warner issued a press release touting a similar bill he was introducing in the Senate that allowed drilling off the coast of Virginia.

Just as problematic is Senator Warner’s ambivalence toward extending the wind energy production tax credit when he says he’s for it but he most recently voted against it. The failure of Congress to extend this tax credit for wind is costing us real jobs in Virginia. The big Spanish wind firm, Gamesa, recently pulled out of Virginia and wind firm Invenergy just put its plans for a wind farm just outside Roanoke on hold because of uncertainty over the the wind production tax credit.

We all know that Senator Warner understands climate change is real. So then why is voting with Big Coal and Big Oil and against Clean Energy?  I suggest you ask him.