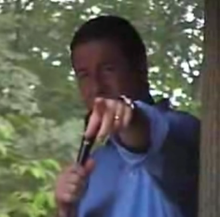 So far, the Kaine campaign has agreed to debate in the following places in Virginia: Arlington, Ashland, Blacksburg, Fredericksburg, McLean, Midlothian, Norfolk, Richmond, Southside. My understanding is that the Kaine people also were in talks with a number of other venues for debates, including at least one in Southwest Virginia.

Now, here are the places in Virginia where the Allen campaign’s agreed to debate: Blacksburg, McLean, Midlothian. Notice a few that are missing there? That’s right: the entire Hampton Roads region, the NOVA exurbs (e.g., Fredericksburg), Richmond, Southside Virginia, and Southwest Virginia. Basically, Allen gave the middle finger to all those parts of our state. Nice, huh?

So, what does all this tell us about Tim Kaine? Several things, all good: 1) he’s not afraid to debate George Allen, anytime anywhere; 2) he wants the maximum number of Virginians to hear what he and George Allen, standing next to each other, have to say, so they can compare and contrast; and 3) he wants to debate all over the state, so no region is left out.

What does this tell us about George Allen? Several things, all bad: 1) he’s terrified to debate Tim Kaine, not surprising given his horrendous record voting 96% of the time with George W. Bush (two unpaid-for wars, one unpaid-for new entitlement, huge tax cuts for the wealthiest Americans, exploding the debt, etc.) and also the fact that Kaine keeps kicking his sorry butt every time they DO share a stage; 2) he wants the minimum number of Virginians (that he can get away with) to hear what he and Tim Kaine, standing next to each other, have to say, so they can compare and contrast (of course, on the 6th anniversary of the “macaca” incident, it’s no wonder; you never know what crazy s*** will come out of Allen’s mouth when he opens it); and 3) he clearly does NOT want to debate all over the state, specifically blowing off Fredericksburg/NOVA exurbs, Norfolk/Hampton Roads, Richmond, and Southside.

So, Virginia, who would you rather have representing you in the Senate? Someone who hides from the people of Virginia, as George Allen does, or someone who is happy to discuss and debate the issues anytime, anywhere? And no, that is NOT a trick question. 🙂