(UPDATE to this story: two letters to the editor, one by “a Vietnam Era Veteran and one who has worked as a volunteer with veterans returning from deployments,” the other by “the mother of a wounded warrior,” lambaste Barbara Comstock for her wildly inappropriate campaigning for Mitt Romney and bashing President Obama at an apolitical event honoring wounded warriors. #FAIL – promoted by lowkell) 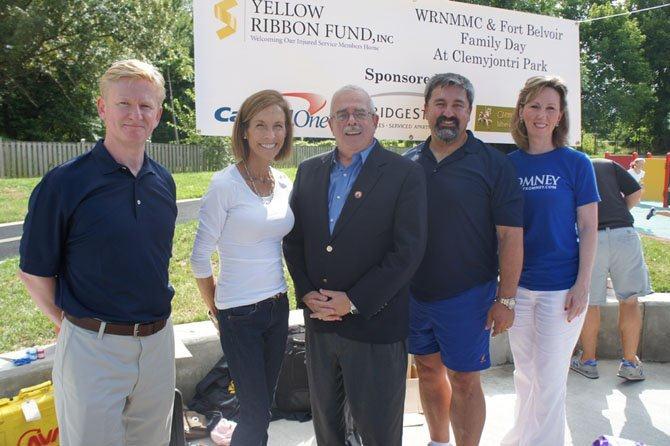 Yep, it looks like the hyperpartisan right wingnut, Del. Barbara Comstock (on the right in the photo by The Connection newspapers), is at it again. This time, Comstock managed to politicize something that should never be politicized – a picnic for wounded warriors and their families. The picnic was hosted by the Yellow Ribbon Fund (mission: “Welcoming Our Injured Service Members Home”) and held at in McLean (at Clemyjontri Park).

A number of politicians – Rep. Connolly, Del. Comstock, and others – attended the event to honor the service members and their families. Again, though, this was not – repeat, NOT! – a political event in any way, shape, or form. To the stark contrary, this was an event that absolutely shouldn’t have been political in any way, but instead should have been focused 100% on well-deserved, heartfelt recognition of the tremendous sacrifices made by our military men, women and families.

Just to be clear, just because an event is apolitical in nature doesn’t mean that politicians like Rep. Connolly can’t or shouldn’t attend them. To the contrary, it’s the right thing for the people’s elected representatives to do just that, and I’m sure it’s appreciated by most of the participants at these types of events. As long as, of course, said representatives’ (and, more to the point, delegates’) behavior is appropriate to the occasion.

Which brings us to Republican attack dog Barbara Comstock. As you can see from the photo, Comstock managed to be totally partisan, inappropriate, crass, you name it, by wearing a Romney shirt to the picnic. In addition, I hear that Comstock offended several folks at the event, as she went around trashing “Obamacare” to anyone who would listen. Truly, that is a no-class move by Comstock — but one that’s totally in keeping with her hyperpartisan history, including being “almost unhinged” about the Clintons.

Oh, and for those Republicans out there who’d argue that what Comstock did at this event for wounded warriors was totally appropriate, I’d ask them: what would you be saying if a Democrat, let’s say Rep. Connolly, had worn an Obama shirt to this event and gone around trashing Mitt Romney, Republicans, etc. All at a picnic to honor wounded warriors? I think we can all imagine the outrage, wailing, and gnashing of (soft?) teeth we’d be hearing at this point. But when Republicans do it, of course it’s fine. As the saying goes, “it’s ok if you’re a Republican” (IOKIYAR). Ugh.