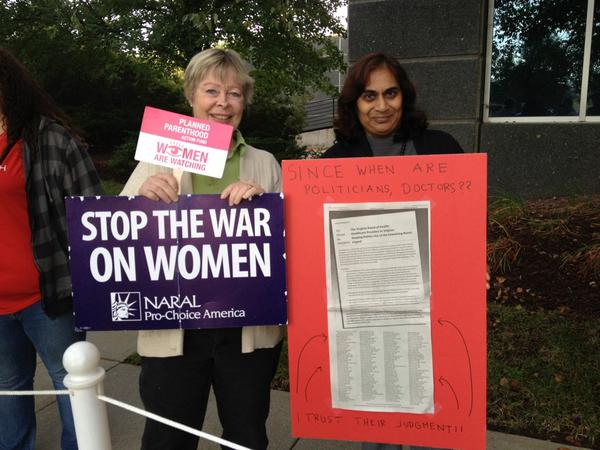 This afternoon the Virginia Board of Health deliberating health regs for abortion  clinics rejected two attempts to grandfather existing clinics proposed by Jim Edmonson. They rejectd a process for waivers also promoted by him.

And they pushed through a final vote in supported of the rigid regs, which lined up with the Kooch (the AG) and Transvaginal Bob (VA Gov.) 13-2.

Next, I’ll offer some additional impressions, gatherred from several Twitter feeds and what I was able to hear through U-Stream.  Although advocates from both sides tried to attend, and some pro-choice supporters were in the hearing room, it appears the audience was largely anti-choice. The Board announced one time for opening the hearing room and another (earlier) one when it became available, catching the pro-choice people short.

Groups supporting choice, including the ACLU indicated that many, perhaps a hundred or more were kept from the hearing room and had to watch in another room.  Additionally, the Board strictly limited the statements by many health advocates and cut off the public comment period. And it appeared the fix was in. It makes you wonder. Where is the democracy?