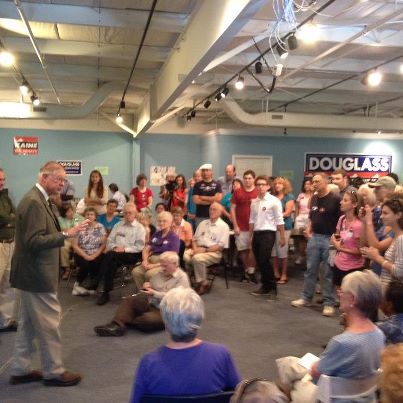 Does anything scream “empty suit devoid of any ideas or answers to legitimate questions” than this?

Rep. Robert Hurt predicted Wednesday that he will win re-election and questioned the “character” of Democratic challenger John Douglass due to his efforts to inject the uranium-mining debate into the congressional race for the 5th District.

“The things that he is saying are untrue. I think that the things that he is saying about me and my interest in this reflect his character,” Hurt, R-Chatham, said in an interview when asked about Douglass’s attempts to tie him to a uranium project in Southside Virginia. “And I don’t think that the people of the 5th District deserve to have a person of that sort of character representing them. And I predict that they won’t.”

Just a few points on this drivel.

1. Going ad hominem is not a substitute for making a serious argument or answering serious questions about your (highly sketchy) behavior. Actually, going ad hominem is a red herring logical fallacy, “attacking the arguer instead of the argument.” As such, it is an “error in logic… intended to replace the lack of real arguments.” In other words, nice try, but no cigar – not even close – for Congressman Empty Suit. Just as it was a big-time #FAIL when your Rush Limbaugh Wannabe shock jock/attack dog did the same thing back in August. Sensing a pattern here? Hmmmmm.

2. Just for Hurt’s information, Brigadier General John Douglass has more accomplishments in his little finger than Hurt has in his entire body. That includes service on the U.S. National Security Council “as director of defense programs… responsible for [President Reagan’s] strategic modernization program.” On the other hand, Hurt has…well…uh…been a career politician who, since 2011, has voted in lockstep with Eric Can’tor, John Boehner, and the rest of the Most Unpopular (and Most Useless) House of Representatives in American History. Impressive, huh? Not.

3. As for the uranium issue, Hurt’s attack on John Douglass for supposedly injecting the issue into the campaign is laughably wrong. In reality, many people have raised this issue over the years, including Tom Perriello in 2010, the League of Conservation Voters, the Sierra Club and others. The reason the issue hasn’t gone away, nor is it likely to do so in the foreseeable future, is that Hurt hasn’t provided any serious answers to peoples’ (100% legitimate) questions about his family’s financial stake in Virginia uranium mining. Of course, Hurt can’t answer that question honestly, at least if he hopes to get reelected. Instead, he goes for the first refuge of scoundrels everywhere: attacking the character of anyone who raises the uncomfortable issue. Think about it: if Hurt didn’t have anything to hide on this, why would he need to resort to ad hominem attacks, let alone on an honorable man, patriot and veteran like John Douglass? Fascinating.

The bottom line: Hurt is attacking John Douglass because (pick one or more of the following): a) Hurt’s an empty suit and has nothing of substance to say; b) Hurt’s rattled; and c) Hurt needs to do SOMETHING to cover up for his highly suspicious, yet unanswered, financial ties to uranium mining interests. Add up a+b+c and what do you get? One big fat #FAIL for Congressman Empty Suit.