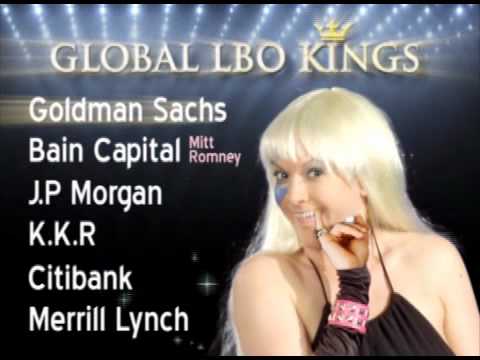 Willard “Mitt” Romney and the Republican Party are busy deceiving the American people into thinking that Romney is best fitted for the presidency because his business experience will enable him to create, here I quote Romney, “lots of jobs.” What they aren’t going to do is tell Americans what Bain Capital actually did under Romney, even though that’s how he made his millions. Neither will the corporate media which, wittingly or unwittingly, act as if the average citizen can’t understand all those “complicated” economic ideas. Let’s pull the curtain back on private equity and leveraged buyouts and take a peek at the money-manipulating wizard.

The term leveraged buyout simply means purchasing a company using lots of borrowed money, while using the assets of that company as collateral (the “lever” for the debt). The whole purpose of leveraged buyouts is that it allows a group of investors to risk very little money and reap very large profits, using other people’s money.

Please note…Romney as a highly successful, private equity CEO specializing in leveraged buyouts did not spend his career creating jobs as his father did at American Motors. Instead, he spent it creating debt, debt that other people had to pay back. His job was to maximize profits for his investors.

Bain Capital looked for companies that had good cash flow and valuable assets but were having problems. Then, Bain investors would put up maybe 10-20% of the money needed to take over the company. Bain would get the rest of the necessary money by borrowing it by putting up the assets of the acquired company. Just like the mortgage on your house, someone would have to pay back all that borrowed money, but it wouldn’t be Bain. What Bain would do is collect huge management fees for telling the company how to slash expenses in order to pay the cost of the borrowed money. One of the first ways to do that would be to fire “excess” employees. A prime example from Bain Capital is the now-defunct KB Toys.

Matt Taibbi, in his Rolling Stone article “Greed and Debt: The True Story of Mitt Romney and Bain Capital,” explains in simple language exactly how Bain, while Romney was still CEO, took over and destroyed KB Toys.

In 2000, Bain Capital targeted KB Toys for takeover. As Taibbi notes, “The debacle that followed serves as a prime example of the conflict between the old model of American business, built from the ground up with sweat and industry know-how [i.e.,George Romney], and the new globalist model, the [Mitt] Romney model, which uses leverage as a weapon of high-speed conquest.”

Bain put up $18 million to acquire KB Toys and got financing for the remaining $302 million it needed. Little more that a year later, Bain gave itself a “dividend recapitalization.” KB Toys redeemed $121 million of its stock and took out more than $66 million in bank loans. Of that $187 million, $83 million went to Bain’s owners and investors, including Romney.

Taibbi quotes Heather Slavkin Corzo, who follows private equity takeovers for the AFL-CIO. “The dividend recap is like borrowing someone else’s credit card to take out a cash advance, and then leaving them to pay it off.”

In the end, Bain made a return of 370 percent on its $18 million investment. As for KB Toys, it declared bankruptcy when it couldn’t service all that debt. Its employees were fired without any severance or notice.

As Taibbi states, “KB Toys had built a small empire by targeting middle-class buyers with value-priced products. It succeeded mainly because the firm’s leaders had a great instinct for what they were making and selling…Bain’s experience in the toy industry, by contrast, was precisely bupkus. They didn’t know a damn thing about the business they had taken over – and they never cared to learn.” They just took the money and ran.

Sometimes, leveraged takeovers work out well. That’s what happened with Bain’s investment in Staples. Other times, companies are destroyed and jobs are lost, but the Bain investors always walk away with huge profits, profits taxed at 15%.

So, please don’t buy the snake oil that promises Mitt Romney has had experience in creating jobs. His experience has been in creating debt that other people will have to pay back. Hmmm…That sounds like the George W. Bush model of executive leadership.