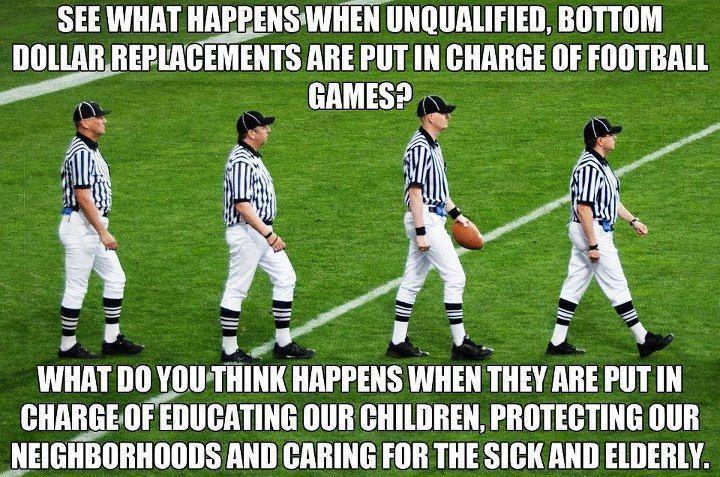 Of course, Republicans have no concept of irony, but for the rest of us, this is hilarious.

After the Green Bay Packers were robbed of a win by an blown call during Monday Night Football, union-busting Wisconsin Gov. Scott Walker (R) – a Packers fan – took to Twitter this morning [and] demanded the return of the league’s unionized officials…

Walker’s sudden support of union labor is surprising, given his push for a radical union-busting law that effectively ended collective bargaining for many of Wisconsin’s public employees. The law, which Walker and his fellow Republicans pitched as necessary to fix Wisconsin’s budget before admitting that it was the “first step” in an anti-union strategy, was so unpopular that it led to massive protests outside the state capitol in Madison and recall elections against Walker and six Republicans in the state senate.

Multiple Packers players, incidentally, urged Wisconsinites to vote against Walker in the recall. And while Walker decries the scab officials who replaced union labor on the football field, he doesn’t hold himself to the same standard: after his union-busting law went into effect, union workers were replaced with prison labor.

Brilliant, huh? No, I guess not, more like the height of hypocrisy.

Speaking of hypocrisy, how about union-bashing Paul Ryan, saying “Give me a break. It is time to get the real refs.” Yeah, we’ll consider giving you a break, Paul, if you give teachers, firefighters, police officers, construction workers, and all the other hard-working union workers out there a break. But I guess you only care when it comes to your football team losing on a bad call by scab officials. Pathetic.

THIS is why unions and worker power are important. THIS is why we need a strong public infrastructure that doesn’t get privatized to death. THIS is why you can’t treat workers like crap without it harming the greater society.

Exactly. The question is, why is it so hard for Republican’ts like Paul Ryan and Scott Walker to understand this elementary concept? Oh yeah, I almost forgot, because they’re Ayn Rand ideologues and corporate tools.

The Democratic Party of Virginia - which hasn't lost a statewide election since 2009 and sure as heck doesn't plan to lose one this year! - is meeting today. Here are a few highlights... https://bluevirginia.us/2021/06/saturday-news-iran-elects-hardline-president-with-nuclear-deal-in-balance-biden-marks-milestone-of-300-million-coronavirus-vaccination-shots-in-150-days-juneteenth-reminds-us-just-how-far#comment-5425707006

"More empty words from Glenn Youngkin..." is a phrase that can apply to a whole host of issues, including this one. https://bluevirginia.us/2021/06/saturday-news-iran-elects-hardline-president-with-nuclear-deal-in-balance-biden-marks-milestone-of-300-million-coronavirus-vaccination-shots-in-150-days-juneteenth-reminds-us-just-how-far#comment-5425608492