This month’s Penn Gazette, the journal of the University of Pennsylvania, has an interview with Jon Huntsman, C’87, the one candidate in the Republican field who displayed reason and critical thinking skills during the GOP primaries. Of course, that meant that Huntsman, former governor of Utah and President Obama’s ambassador to China, was one of the first candidates to drop out of the race,

In the interview, Huntsman has some stinging criticism for the state of politics in America and for his own party. He notes that his candidacy was doomed from the start because of “too much in the way of well thought-out and developed policy papers, and not enough in the way of pandering” to the extremists in the Republican base.

Huntsman remarked on the difficulty of getting a reasoned message out in the political and media climate of today. “Nobody in today’s world really wants to have issues rolled out in the context of solutions or problems to be resolved. Everything today is…pitched in hues of politics based on personal destruction and vilification of your opponent.”

A prime example Huntsman gave is climate change and global warming. “Climate change is one such area. It’s fallen victim to politics. Yet when I look at Congress, I don’t see a lot of physicists present. I don’t see any climate scientists…If you let science do what science is supposed to do, they’re going to render a good judgment that’s peer reviewed and based on rigorous scrutiny, and we’re going to have good information on which to base public policy.”

Now that’s a position that was bound to get you kicked off the stage during the GOP primaries. Some other remarks by Huntsman show just how far he’s grounded in reality and how extreme his opponents were, and are.

“There’s a role for government. It has to be defined. And whatever government does, it must do well. And the Republican Party still has not yet been able to really define what that proper role of government is.”

Huntsman further explained how far from its original ideals the GOP has strayed, noting that the party of Lincoln began as one seeking protection for the rights of minorities, that it was Theodore Roosevelt who first spoke of the importance of protection of the environment, that Eisenhower was responsible for the largest national infrastructure program we have ever had – the interstate highway system.

“You can’t even talk about infrastructure today in a Republican gathering without getting laughed out of the room,” Huntsman remarked.

Addressing the present state of politics, post Citizen’s United, Huntsman said, “Fundamental political reform is needed: campaign-finance reform, term limits, closing the revolving door on members of Congress who kind of slide right on through to become lobbyists within 24 hours. Things like this fundamentally need to be addressed and changed if we’re going to be able to re-infuse any trust into the system.”

Jon Huntsman reflects the kind of Republican who could enrich our political debate, who could reach sensible compromises with Democrats to solve the problems facing the nation. Sadly, he’s one of just a handful. The rest stand for nothing except their own ambition and self-interest, serving their corporate masters with little regard for the true meaning of “public service.”  All of us, Democrats and Republicans alike, pay the price when extremism and corruption take over our politics.

There is one huge difference between Jon Huntsman and Mitt Romney. Huntsman refused to become a chameleon in order to satisfy the most extreme voters in the Republican base. Romney, on the other hand, was quite satisfied with etch-a-sketching himself into a parody of what he used to be, reversing just about every moderate view he had ever held.

Do you remember Silly Putty, that silicon toy for kids that would melt into whatever shape its container had? Mitt Romney reminds me of that. He has become Mr. Silly Putty, oozing into the shape of some “severely conservative” guy. We don’t know what he really stands for because the only thing he stands for is whatever gets him what he wants. The other thing to remember about Silly Putty is that it shatters under pressure. 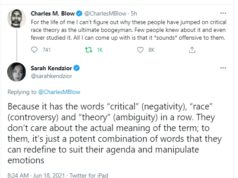 Here’s Some Background – and Some Responses – For the Next Time You Hear Glenn Youngkin, Winsome Sears, Jason Miyares, etc. Ranting About “Critical...